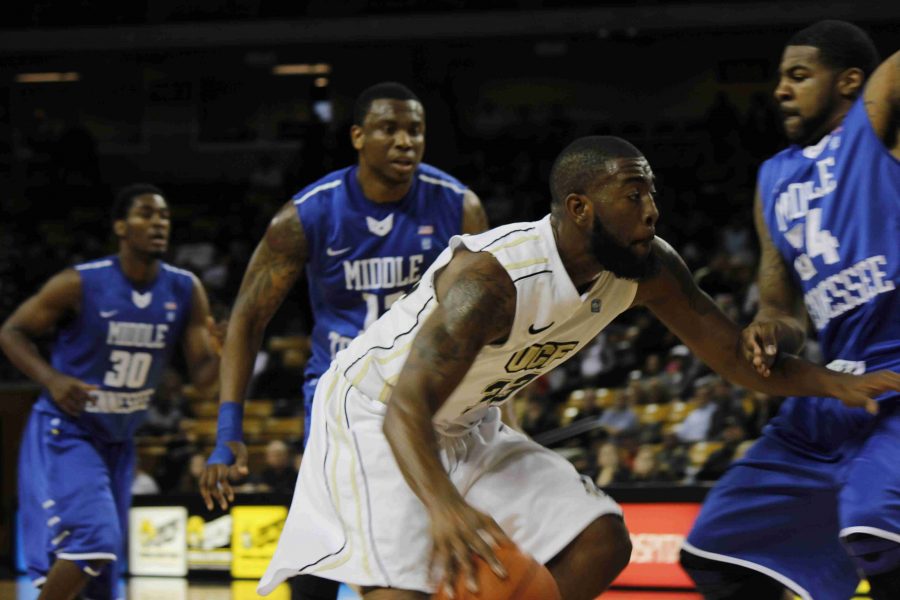 ORLANDO — Tristan Spurlock had 17 points while Keith Clanton had 15 points, 7 assists and 8 rebounds, but it wasn’t enough to stop the Blue Raiders, defeating the UCF Knights, 75-61, Tuesday evening at the UCF Arena

With 4,118 fans in attendance, UCF were hoping to start the season 4-0, but Middle Tennessee made sure that wasn’t going to happen, especially at home.

“We were just playing selfish,” said Senior forward Keith Clanton, who was two rebounds short from having a fourth consecutive double-double. “We weren’t stepping up, no one was talking.”

Isaiah Sykes fouled out with 6:42 remaining in the second half, giving him 7 points and 3 assists for the evening.

Keith Clanton lead the Knights in the first half, adding 8 points and 3 rebounds, searching for another double-double.

“We weren’t playing tough enough,” said Tristan Spurlock. “We got to do a better job, they did a good job. We can’t throw it into Keith and expect a miracle to happen.”

With Isaiah Sykes having foul trouble for most of the game, head coach Donnie Jones had Daiquan Walker step in as point guard for much of the game.

Middle Tennessee, however, produced a 13-0 run late in the second half, ending UCF’s chances of going into Friday’s showdown at Gainesville with an unbeaten streak of 4-0.

“There was some bright spots in this game that we will build on,” said coach Jones on the loss. “They had 19 assists as a veteran team.

Despite averaging 37 points in the first half, The Knights had difficulty controlling the Blue Raiders offense, sharing buckets during the opening minutes of the game.

The Knights look to bounce back from the loss, as they visit No. 7 Florida Gators on Friday.