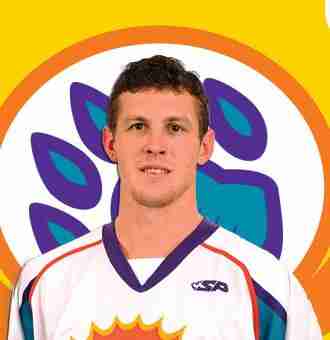 ORLANDO — Edward Levens was signed and activated by the Orlando Solar Bears prior to Wednesday night’s home game against the Gwinnett Gladiators. Levens was one of two local players who were invited to the team’s training camp following open tryouts earlier this year.

“I was really surprised I got a call for training camp, and then I got released due to the NHL,” said Levens after his first game for his hometown team. “For them to call me back again to play in a season game at home, I’m kind of dumbfounded. I didn’t know what to say.”

Levens saw the ice a fair amount during the Solar Bears 2-1 loss to the Gwinnett Gladiators on Wednesday night. He made his presence known minutes into the game when he got into a fight with Gwinnett forward Chris Clackson.

A resident of Clermont, Florida, Levens had his parents, girlfriend and a couple of friends in attendance on Wednesday for his home debut.

“It’s crazy, I never thought that day would ever come,” said Levens on playing for the first time in the Amway Center. “Especially in probably the best facility in the country right now.”

Levens previously played in the United States Hockey League for the Indiana Ice in 2006-2007. He posted two goals, five assists and 100 penalty minutes in 46 games for Indiana.

“Panzo and Levens really impressed us in camp,” said Solar Bears head coach Drake Berehowsky. “I thought they had a great camp.”

Berehowsky did not dismiss the idea of Panzo joining the team later in the season if he is needed.