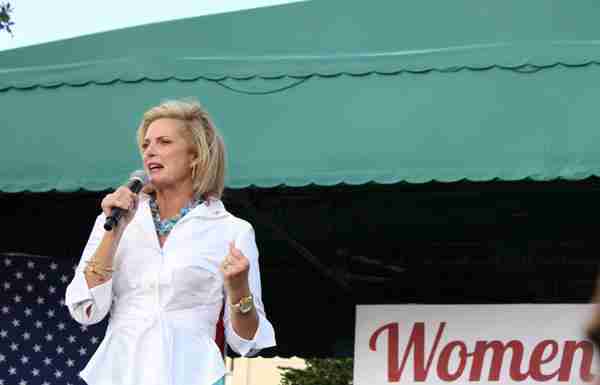 “I spoke to Mitt before all the primaries started, and I told him go save America,” said Ann Romney. “We’re going to make sure in November we make Mitt Romney president of the United States.”

Ann Romney has been campaigning in Florida since arriving on Monday, when her husband and President Obama debated on foreign policy.

Knowing that Florida is a key state, many analysts predict that the sunshine state could be a deciding factor in the 2012 election.

“I am proud to say that Mitt Romney meets expectations for every one of us,” said Orange County Mayor Teresa Jacobs, who spoke before Ann Romney was introduced to the public. “Romney’s message of economic opportunity and optimism resonates with all of us in Orange County.”

“We need a real partner in Washington D.C, who gets it, is going to team up and foster to create jobs,” Jacobs added.

Many Mitt Romney supporters were glad that the potential first lady made a visit to Central Florida.

Orman Cepeda, 41, who is originally from Cuba but left in 1972 to escape Fidel Castro’s revolution, believes the way the country is heading will lead to an ominous time for the nation.

“I left Cuba in 1972 because I didn’t like the way the government was turning out to be. With Mitt Romney, we can establish a more fiscally conservative movement to better this nation.”

Ann Romney admitted that at first she was skeptical about getting back into a campaign grove, but she felt that her and her husband had an obligation to save America before it becomes too late.

“It’s such a critical election,” she said. “We know that there are people out there still hurting from this economy. We have friends and neighbors that are suffering from this economy, and we have people coming up to me at every single event asking for help.”

“I can tell you right now that help is on the way.”

With 12 days before election day, Ann Romney asked for everyone to vote and to bring people to the polls.