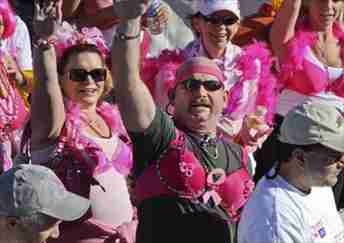 Natasha Tetley / [email protected]
ORLANDO — October is an important month. For Floridians, it means slightly cooler weather and a welcome respite from the heat and humidity. For the world at large, it means a month of breast cancer awareness.Why not combine the two and get walking?

This Saturday morning, the American Cancer Society will host the 2012 “Making Strides Against Breast Cancer” 5K walk. The annual event will descend upon Lake Eola Park in downtown Orlando at 9 a.m., with registration beginning at 7:30 a.m.

“It gives us an excellent opportunity to get our message out,” said Christy Clelland, manager of the nonprofit Making Strides of Orlando Metro. “Early detection is key.”

The walk has already collected upwards of $300,000 for the cause, with top contributors ranging from Siemens to Full Sail University to the Yum Yum Cupcake truck, according to the society’s running list.

Breast cancer survivor Margery Gould Rath originated the concept of walking for the cause with her first event in 1984. She called it a “move-along-a-thon,” drawing 200 participants in Boston. In 1993, the event evolved into its current incarnation, officially becoming the “American Cancer Society Strides Against Cancer” walk. One became many, attracting over 4,000 walkers at events in Boston and in New Hampshire in that same year.

Rath passed away in 2001 following her battle with breast cancer, but her spirit lives on in the events that she began.

“I, myself, am a breast cancer survivor,” said Rita Van Trump, online chair of the local Strides organization. “I find events like ‘Making Strides Against Breast Cancer’ a great way to bring awareness to the disease and the battle that must be waged to fight it and bring an end to it.”

This year marks the 14th for the Orlando event. Make a contribution, either through donations of time or of money, this weekend. Attendees are encouraged to don something pink, the official color of breast cancer awareness.

Take it one step further and wear a pink bra to show support. According to the cancer society, “The pink bra is a resounding symbol of how personal the fight against breast cancer is to women.”

For more information, event registration or to make a donation visit http://main.acsevents.org/site/TR/MakingStridesAgainstBreastCancer.