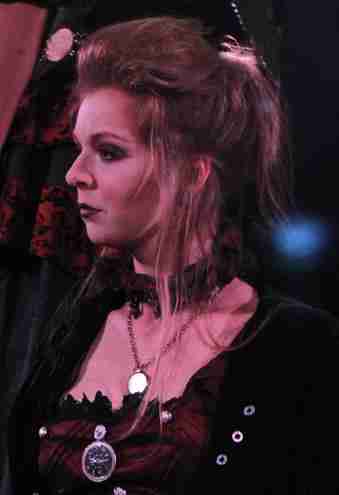 ORLANDO — Samantha O’Hare is one of “Phantas- magoria III”’s shining stars. She works with Orlando’s own Empty Spaces Theatre Company. Like many young college stu- dents, she is balancing her responsibilities to try to define the life she wants for herself.

“I’m still figuring it out. It’s hard to navi- gate sometimes, my levels of interest are huge for a lot of different things,” said O’Hare.

The acting bug first bit her at the age of 15 with a role in “The Odd Couple” while attending Apopka Senior High School. She decided early on to focus on theater because it deals with many of the fundamentals of acting that she considers vital to a well- rounded education.

She credits her education at Valencia College under the guidance of theater pro- fessor Kathleen Lindsey-Moulds for help- ing her fix some of the personal problems she had faced along the way.

“For me it’s the technical things, it’s the small things. My speech and my speed are probably the most difficult,” said O’Hare on her biggest challenges as an actress.

She learned that she tended to speak too fast and not open her mouth wide enough to make certain sounds loud enough.

Valencia theater professor John DiDon- na has worked with O’Hare for nearly eight years on several productions and feels strongly about how she has progressed over that time.

“Her energy, her focus, her talent, her ambition and her perfection,” said DiDon- na on what inspires him about O’Hare as an actress.

O’Hare credits her love of reading for shaping her desire to become an actress. Her fascination with literature helped O’Hare escape into a world of her own when she was younger.

Part-time jobs have also been a diverse experience for O’Hare. She has driven an ice cream truck, been a nanny, delivered food and even worked as a bank teller. Her favorite job was working with the ice cream and her worst job was working in the bank because of the stress levels that came with the job.

“Right now I’m focusing on substitute teaching and I just became a tutor,” said O’Hare. She teaches anything and every- thing for middle school aged students in- cludingEnglish,math,statisticsandbiology.

“I just think it’s important that people take an interest in the work we do as a whole more than one actor. You really have to for theater, there’s no celebrity culture around this at all,” said O’Hare.