Did Officiating Hurt The Knights? 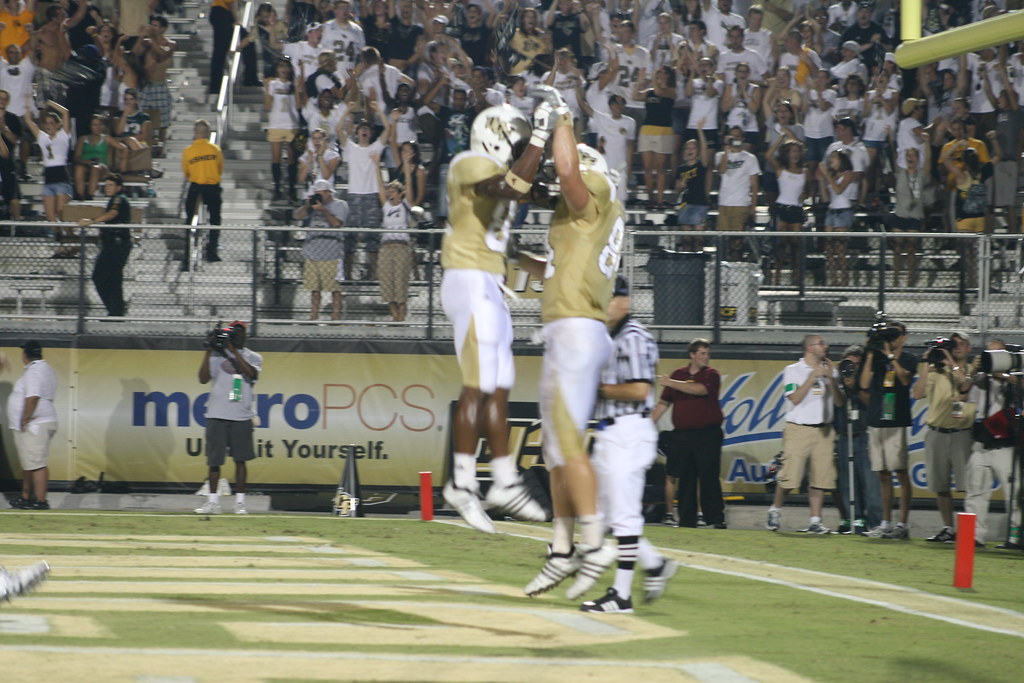 Oh, I know everyone is going to anyway, and they’re right to gripe. I was on the sideline
for the last three minutes of regulation and both overtime possessions, and about a foot to the right of the first down marker on that final 4th and 5.

Maybe my view was a bit obscured by a general love of an underdog, come-from-behind story, but I saw Central Florida QB Mike Greco get the 1st down. I saw the bad spot. Heck, I even overheard a member of the chain gang say “Wow, bad spot.” (Although, in the interest of avoiding a nasty libel suit, he could have just as easily been saying “flat top” about his buzz-cut-sporting companion on the sideline.)

But don’t blame the refs.

UCF is blessed, in a sense, with the image
of being a cow college with a pushover football team. Bigger schools like South Florida Saturday or Texas last year come to Orlando and expect an easy win.

USF showed up, ready to sleepwalk their way through another rout of UCF. USF soon realized they had a football game on their hands when senior Joe Burnett took advantage of USF’s poor kick return coverage
and torched them for 91 yards with 10:32 left to go in the first quarter.
Sadly, UCF is also cursed. They had all the opportunity in the world to catch the Bulls asleep, but focused more on negating their own gains.

UCF had 12 penalties, including 6 personalfouls, for 148 yards.

The most frustrating personal foul was after a UCF third down stop in the third quarter. Facing a 3rd and 14 after an illegal block penalty, USF sent sophomore FB Richard Kelly barrelling down the field. Fifth year senior FS Jason Venson and sophomore DB Justin Boddie forced Kelly out of bounds after 10 yards.

Apparently forcing a strong opponent into a punt situation is a good time to draw a personal foul, because that’s exactly what junior CB Emery Allen did after he slammed his fist into a defender’s helmet.

Don’t blame the officials, UCF shot themselves in the foot.

As for some personal observations, Class Act of the Week Award goes to the reporter from a supposedly unbiased South Florida newspaper who not only changed into a USF polo shirt before the game, but actually took his shirt off in the pressbox.