Opposing views: ‘No Easy Day’ too much or just right? 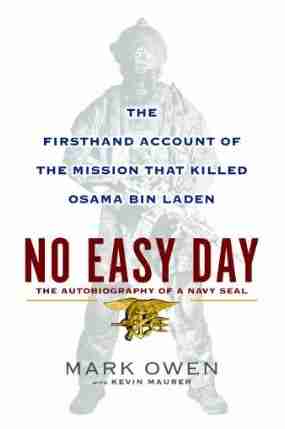 I can see no reason for any book to be banned, whether the author has gone against military protocol to publish it or not.

“No Easy Day” goes against everything we’ve understood about “the enemy” and the “weapons of mass destruction” the alleged mastermind Osama bin Laden possessed in an effort to lead the attack on the twin towers in New York on Sept. 11, 2001.

The author, who assumes the pseudonym of Matt Owen in a one-on-one interview with CNN reporter Mallory Simon, confesses that he and the rest of his team had no idea that they had even killed bin Laden until a child pointed him out among the other bodies that littered the floor of the room.

The mere fact that the former employers of the ex-Navy Seal have taken steps to ban his memoir says something about the validity of the information contained therein.

What is Bush trying to hide?

As I recall, before Barack Obama stepped in to have his own name tarnished as it lay confused on the biased tongues of those who couldn’t distinguish “Osama” from “Obama,” Bush wrote that bin Laden had been hiding in a cave further plotting his more diabolical schemes. In 2011, Obama made him out to be a bigger threat than he appears to be in this book, as Owen paints a picture of him lying dead underneath two women who, similarly, were without evident means of recourse.

Where is the threat exactly? Who should accept the blame for the 148 lives that were sacrificed during that day in 2001?

And why should it take anyone 10 years to answer this question, then another few months to orchestrate the capture and execution of bin Laden, who is said to be the man behind the attack? And why did Owen wait an additional year to publish his own account of the event?

There are so many unanswered questions regarding the secrets that the government has kept from us, and what falsified facts the media has led us to believe. What is the overall truth?

Journalists hold a duty to tell the truth, the whole truth, and nothing but the truth so help me God. Writers should stick to the same code of ethics when writing about an event that holds such gravity as Owen’s book does.

The hunt for bin Laden was one of the most controversial trials of the decade, before Casey Anthony came to fame and forced our attention to less pressing matters.

After Sept. 11, the nation became more unified. Whether out of fear or out of love, people placed the American flag in their car windows and displayed the flag in their front lawns as a testament to the shift in the fabric of the United States.

As positive as this may seem, there is one problem and it rests within the media. Controlled by the monopolies that feed the insatiable appetite of the masses, television outlets and newspapers alike pick and choose which truths to expose.

On the other hand, if we reveal the strategies that the Navy SEALs are sworn to keep private, our enemy may be able to use them against us.

A reader might say the author’s goal was not to harm or discredit the statements made by Bush, but to sort out his own perception of what really happened. Upon reading about the emotional effect of the experience, Owen’s motives for writing the book were a practice in catharsis moreso than a personally attack on the facts presented by the government.

Information should be shared equally among the masses so that the public can read between the lines of the documents on both sides of the case.

As the First Amendment suggests, we all have a right to publish, read, write, and believe what we will. If the truth is out there, we are guaranteed the opportunity to find it. Who can say who is right? Have our troops in Iraq been made to look like martyrs in the face of an issue that has even more impact on the world than they ever imagined?

Who’s to say. Only you can be the judge.

Few would disagree that Osama bin Laden sealed his fate after masterminding the actions that lead to the horrible attacks on Sept. 11, 2001. Now we see what amounts of the  corporate and personal capitalization actions that lead to his demise, which will undoubtedly lead to further antagonization of American forces overseas and a hinderance of further covert operations against leaders of terrorist organizations.

The fascination with our military special forces, and war in general, is apparent in the media and in movies produced out of Hollywood. Nothing is more broadly intriguing than war, and the film industry has used the dramatics of war to its advantage in an effort to attract high box office numbers.

“No Easy Day” is a novel written by former Navy SEAL Matt Bissonnette under the pseudonym Mark Owen. He was part of the special forces team that participated in the attack that killed Osama Bin Laden in Abbottabad, Pakistan on May 2, 2011. He has said that he was second in line following the point man that initially shot Bin Laden. He later himself shot Bin Laden several times after receiving massive trauma from a gunshot wound to the head.

Step-by-step accounts of the tactics used during the raid and the methods of gathering intelligence leading to this final confrontation are indeed intriguing; so much so that the book has ascended to the top of sales charts in recent days as the interest in the story has spread throughout the world.

“The question that has to be asked is did this soldier put other SEALs and Armed Forces in the area at risk by revealing tactics and intel gathering techniques used in this mission,” said a former Army member who wished to remain anonymous for this story.

The use of couriers to track targets, profiling of locations, organization of missions and finally executing actions are all current tactics used by the military.

Submitting the book to the United States Department of Defense for analysis and clearance would have undoubtedly prolonged its release and allowed for an unknown amount of time to pass, therefore lowering public interest and overall sales.

The fact that it differs from the government’s report and goes against their will also commanded attention, which helped initial publicity prior to its release on Sept. 4.

Despite the urge of Bissonnette, “No Easy Day” was written in honor of the work of servicemen and servicewomen and aims to set the record straight. The book still produces what the Pentagon considers a leak of classified information that can hinder future military actions by special forces.

“The SEALS are technically considered what’s known as direct action, meaning their target was an individual and they went in and got him, how they got him is immaterial,” said a retired Special Forces soldier who wishes to remain anonymous.

Another former SEAL, Brandon Webb, has publicly reported that sources informed him that Bissonette wrote the book as a result of the poor treatment he received from the U.S. Navy following the raid and before he retired from military service.

If this is true, it amounts to a vendetta against the U.S. government, which may partly explain the reasons for officials taking legal action against Bissonnette.