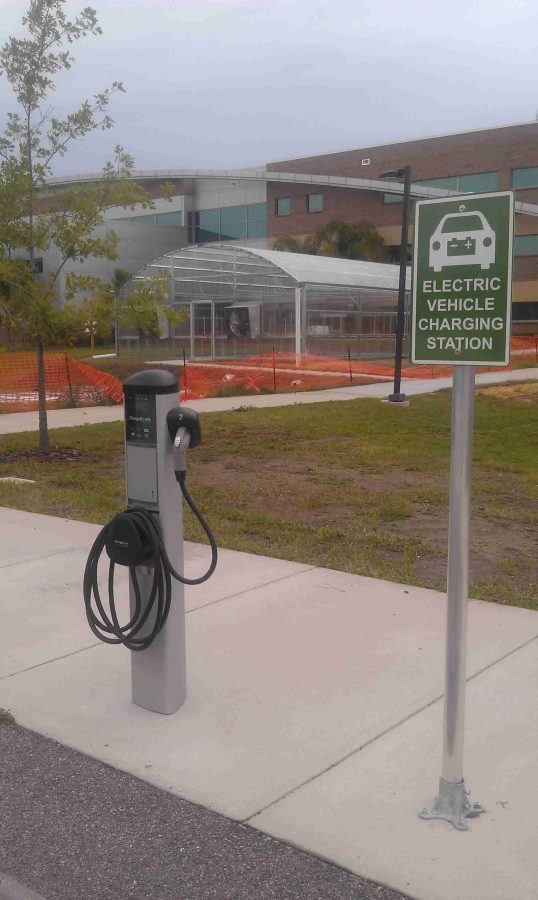 There are 10 prime parking spaces that sit empty every day on the west campus of Valencia College. Nestled up against the sidewalks by the AHS building and building seven, these vacant slots usurp even faculty and staff parking, and are open to anyone.

Anyone who drives an electric vehicle.

The spots are reserved for potentials users of the five electronic vehicle charging stations that were installed on campus this spring.  For 14 cents per kilowatt hour, depending upon the type of vehicle, drivers can get a four-hour charge for less than a can of Coke — about 50 cents.

The stations were free to Valencia as part of Charge Point America, a $37 million project run by Coulumb Technologies that distributes home and public charging stations throughout ten regions in the United States in partnership with major American automakers.

Orlando Utilities Commission (OUC) worked with Coulumb to help set up 300 stations within 70 miles of downtown Orlando. Dr. Deborah Green, director of sustainability for Valencia College, lobbied hard to make sure that some of those would go to Valencia.

“In 2008, 40 percent of our greenhouse gases were from transportation,” Green explained, noting Valencia’s efforts to construct only “green” buildings and to reduce its carbon footprint. “We’re nowhere on reducing that.”

Green hopes that the availability of electronic charging stations will help make a dent in that statistic. But so far, the stations have only been used as placeholders for empty spots.

“Only OUC people have used them as far as I know,” Green admits. “It’s kind of a ‘build it and they will come’ thing.”

The dual-mode stations are capable of charging two vehicles at a time, either EVs or PHEVs (Plug-In Hybrid Electric Vehicles) which can be charged using a standard 120-volt outlet and extension cord. This is known as level one charging.

The stations at Valencia carry 240 volts, enough for level three charging. That amount of electricity is the same as required to run a hairdryer, so the impact on the environment is minimal.

Critics have argued that the major source of electricity is derived from fossil fuels, undermining the positive impact of EVs. Green disputes that argument.

“It’s offsetting petroleum, which is the worst part of the fossil fuel use,” she explains. “We’ll be doing more with renewables for electricity in the future. The amount of electricity that Valencia College gets from the grid is minimal.”

Green admits that there is much to be done, but insists that the stations are a step in the right direction.

The first step up that hill? Getting someone to use them.

Please contact Dr. Deborah Green at [email protected] or at extension 1830, for questions.