Knights drop a tough one as Stony Brook forces game 7 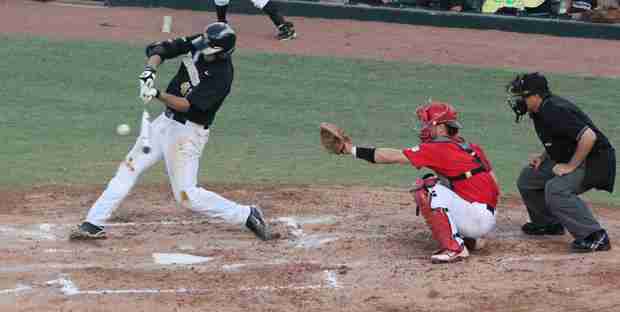 UCF was romped by Stony Brook Sunday night, despite the Sea Wolves playing earlier in the day in the sweltering heat, forcing a decisive game seven Monday.

Beating the Knights 12-5, Stony Brook scored a combined 22 runs in games on Sunday.

“We went out there for the second game, we were dead tired,” said SBU first baseman Kevin Courtney. “Early in the game you start to not feel anything. You go out there and play as hard as you can, and that’s what we did tonight.”

Entering the fifth inning, the Knights had just one hit, which was a D.J. Hicks solo-shot in the second. Hicks, who has been in the UCF cleanup hitter the last few weeks, was dropped to fifth in the order after getting off to a slow postseason start.

“Well obviously D.J. responded. D.J. is a great player, but he’s been struggling a bit as of late,” said UCF head coach Terry Rooney. “I moved him down in the lineup to hopefully create more opportunities.”

Every Stony Brook hitter had at least one hit in the game, and five had multi-hit game. The Sea Wolves were lead by center fielder Travis Jankowski, who went 3-for-6 with two runs scored.

“I feel like I was just able to throw all three of my pitches for a strike,” Rakkar said. “I trust my team, so I just threw pitches that would be put into play.”

These two teams will play against Monday night at 7 p.m., and the winner will advance to Super Regionals, against probable opponent, LSU.

Neither coach has decided who will start Monday night, but both eluded that it will be a pitcher-by-committee game.