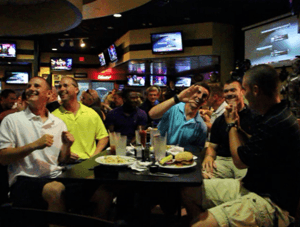 The UCF baseball team anxiously waited as ESPNU announced where the Knights will be headed for Regionals.

The room exploded with cheers after it was announced that the Knights are headed to South Beach for Regionals.

“It is an outstanding and very competitive Regional and we are excited to have the opportunity to play,” said head coach Terry Rooney after the announcement.

The Knights will have to face No. 1-seed Miami, No. 4-seed Stony Brook and No. 3-seed Missouri State in the Coral Gables Region.

The Knights (43-15) will face the Missouri State Bears (39-20) for the first game, Friday afternoon. UCF’s other opponents will be determined after Friday’s games.

The Bears are a dominant team on the mound, as their 2.51-team era ranks second in the nation. One of the Bears starting pitchers, Nick Petree, holds a 10-3 record with a 0.92 era and has 109 strikeouts in 107.1 innings.

No. 4-seed Stony Brook has the second most wins in the nation with 46. The Seawolves are on a roll as they have won 22 out of the past 23 games.
The Knights traveled to Coral Gables earlier this year and outscored Miami 4-1. UCF has won two of their last three games at Mark Light Field.

“I’m excited to play Missouri State and obviously Miami is good,” said first baseman D.J. Hicks. “For me personally, I love playing there. The ball flies, so you don’t have to swing quite as hard.”

The Knights also cheered when the Gainesville regional was announced and they weren’t in it. UCF played the Gators earlier in the year and lost 8-0.

UCF shortstop Darnell Sweeney is hoping to see a lot of black and gold in the stands Friday.

“We’ve had great fan support this past year. A lot of our fans traveled with us and now this is just a three-hour drive so I don’t see no reason why we can’t have a good fan support down in Miami,” Sweeney said.

The regional works as double elimination, meaning a team will have to lose two games before being sent home. The regional winner faces the winner of Baton Rouge Regional.