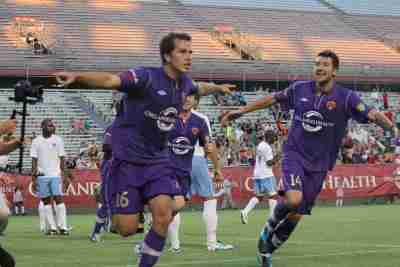 The first match ever between the Orlando City Lions and the Los Angeles Blues ended in a 1-1 draw Thursday night at the Citrus Bowl in front of a home crowd of 7,231, in a game full of near misses.

The Orlando City Lions opened up the scoring notching their first goal on a header by defender Wes Allen set up by midfielder Anthony Pulis’ cross from the corner in the 22nd minute of the first half.

“Playing defense scoring just kind of happens. As a defender you don’t score much so when it happens you tend to cherish it,” said Allen.

It didn’t take L.A. long to answer as they scored just minutes later when forward Bright Dike, on loan to the Blues from the MLS’ Portland Timber, found the back of the net on a header placed in the top right of the net in the 25th minute.

The Blues missed out on their first goal scoring opportunity when midfielder Ricky Waddell sent a clear shot from just outside the penalty box way over top bar late in the 15th minute of the first half. The Blues also missed out on multiple scoring chances in the match including a heel kick from Dike that just rolled by the goal and a shot that bounced off the crossbar late in the second half by Chenyong Park.

The Lions meanwhile made most of their plays on goal from corner kicks. Kieron Bernard sent two headers just over the top of the goal post in the first. Other than set pieces the Lions couldn’t really establish a rhythm on offense.

“We need to make sure for the next match we are a bit livelier. I was disapointed, we were a bit flat tonight and i don’t know why. I thought after the 7-0 win we would have came out with a little bit more energy.” said Heath.

The Lions don’t have much time to reflect on the loss because they face the Charlotte Eagles at home on Saturday night. While the Blues take on the Charleston Battery.