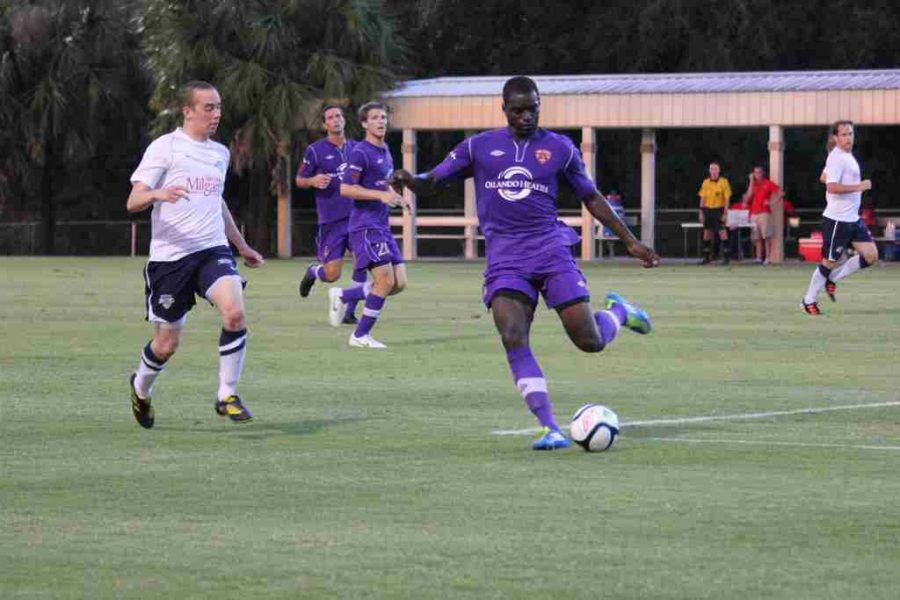 Max Griffin and John Rooney each scored a brace as the Orlando City Lions thrashed KC Athletic 7-0 Tuesday at the Seminole Soccer Complex, progressing the team to the third round of the U.S. Open Cup.

With the Athletics playing their starting IX with no substitutions, the game was a bit one-sided as the Lions took advantage of the sub-less team throughout the game.

“We should have scored a lot more than seven,” said Head Coach Adrian Heath on the impressive win. “We look forward to what’s going to be three very difficult games.”

Jamie Watson, who assisted John Rooney’s goal in the 28th minute, made sure he got in the scoring sheet in the 60th minute when he buried a long ball from the 18 yard line, giving the Lions a 5-0 lead.

“Each game is important for a particular reason,” said Jamie Watson. “We put on a good show for the fans, and we appreciate them coming out and supporting us for 90 minutes.”

John Rooney added another goal to the scoring sheet as well, when he blasted a shot from the corner kick line to add a 0-6 deficit for the visitors.

The Lions got off to an early lead when KC Athletic defender Cody Andrews drew a goal in the fourth minute to give Orlando a 1-0 lead.

The rest was “murder she wrote,” as the Lions scored four goals in the first half, two of which came in the 26th and 28th minute, thanks to Max Griffin and Center Attacking Midfielder John Rooney.

Max Griffin secured his double just before halftime, in the 42nd minute.

“This could be the most important week of the season,” said Adrian on the Lions having to play two more games this week with only one day of rest.

The Lions announced Tuesday morning that they will be hosting Stoke City and Nottingham Forest for their summer friendlies in July.

The Lions will rest on Wednesday and then begin a long stretch in the USL Pro, when they host the LA Blues and Charlotte Eagles, Thursday and Saturday at the Florida Citrus Bowl.

As for the U.S. Open Cup, the Lions will visit LIVESTRONG Sporting Park on Tuesday, May 29, as they play MLS side Sporting Kansas City in the third round of the tournament.