UCF, one win away from a ring 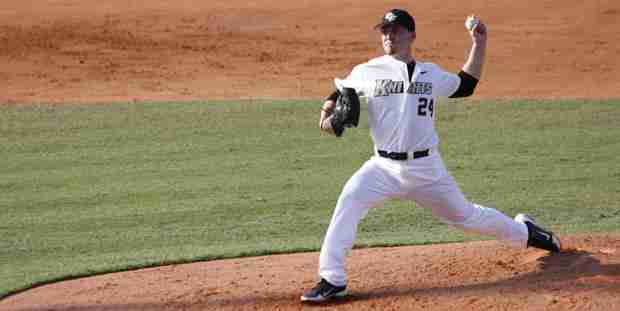 UCF takes game one of the three game series against Rice, although mother nature did her best to stop the two teams from playing. Two rain delays and nearly 24 hours after the first pitch, the Knights were able to hold off the Owls 8-6.

Alex Friedrich’s bases loaded 3-run double gave UCF an 8-0 lead in the fourth inning, before Rice surged back and scored six runs in the next inning. The Owls scored three runs in the fifth and left the bases loaded, before weather suspended the game until this afternoon. They picked up right where they left off and scored three more runs before reliever Roman Madrid could stop the bleeding.

Joe Rogers picked up his program-leading 29th career save, and conference-leading 12th of the season, with a six-out save to close the door on Rice.

With the win, UCF takes a one game lead over Rice in the conference standings, needing just one more win to clinch the C-USA.

Game two of the series will begin just after 7 p.m., and will feature a pair of sophomores starting for both teams.

Weather is expected to play a factor in Friday night’s game, just as it did for UCF the last three games. As of 6:30 p.m., the forecast calls for rain throughout a majority of the duration of the game.