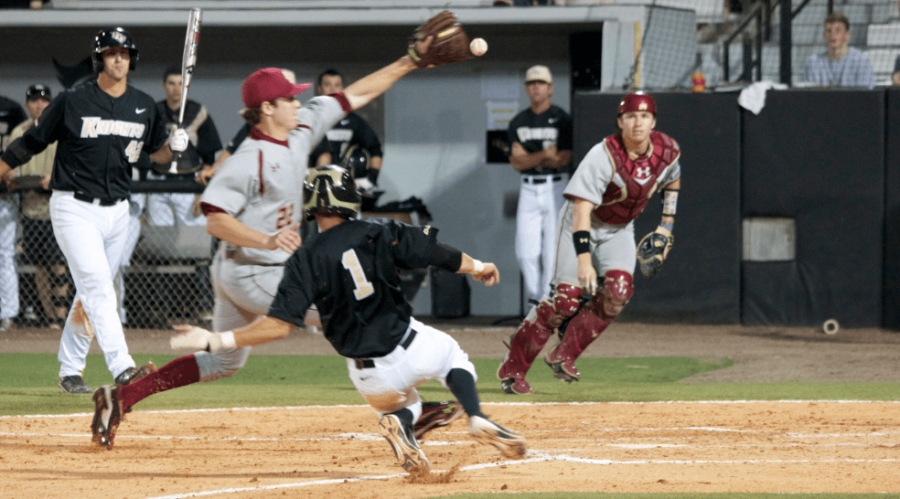 UCF second baseman Travis Shreve scores his first of two runs on the night, as the Knights beat Boston College 6-5.

Ryan Breen’s two-out RBI double in the seventh inning proved to be the game-winning hit, as the UCF Knights beat the BC Eagles 6-5, Friday night at Jay Bergman Field.

Starting pitcher Ben Lively pitched six strong innings, and allowed three runs on four hits while striking out a career-high 11 batters, before handing the game over to the bullpen.

“I think Ben Lively was really good,” said head coach Terry Rooney. “From start to finish, I think it was one of his best outings since being at UCF, and that’s what we need for him to pitch in a major role here.”

Knights closer Joe Rogers, who entered the game with one out and a runner on in the eighth inning, recorded his first save of the season.

Lively was in line for his second victory of the season, before relief pitcher Roman Madrid allowed two runs in his one inning of work. UCF relievers combined for three innings, while allowing two runs on two hits, and also striking out three batters.

“Joe Rogers has tremendous confidence, and we have the utmost confidence in him,” said Rooney. “I think the biggest thing is just to get him out there in a tight situation.”

Despite a rocky start, in which the Knights were being no-hit headed into the fifth inning, the UCF bats woke up just as Lively began to settle down.

The Knights took the lead in the fifth inning, when they exploded for four runs. The rally was started by Nick Carrillo, who crushed a game tying, two-run shot following an Alex Friedrich leadoff double.

“The great part about our team is that it doesn’t matter if its the top or the bottom, someone is going to get the job done,” said number nine hitter Travis Shreve, who is currently riding a five-game hit streak.

Most of UCF’s damage was done by the bottom third of the line up. Combined, they went 6 for 12 with two RBIs and four runs scored.

D.J. Hicks failed to get a hit in each of his three at-bats, ending his 6-game hit streak, which extended back to last season.

These two teams will play again tomorrow evening, for the second of a three-game series. The projected starters for the game are Brian Adkins for the Knights and Matt Alvarez for the Eagles.

“Brian needs to be better,” said Rooney. “What we’re really looking for out of him is to have a little bit better command down in the zone, than he did last week.

Adkins struck out five batters, and allowed four runs in five innings of work during his start on opening Knight.