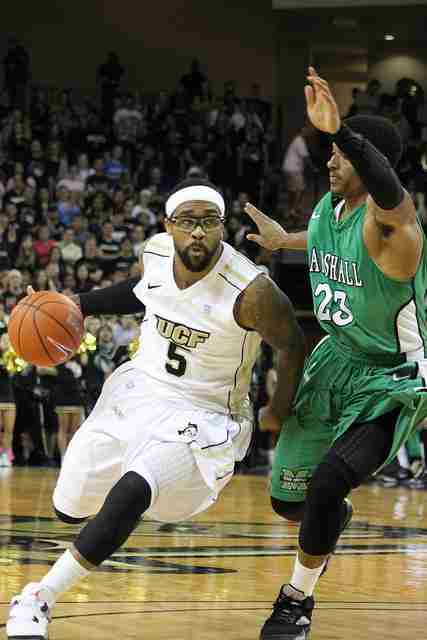 Marcus Jordan showed that he possesses some of the clutch gene that made his father, Michael Jordan, so great, by hitting a three pointer that would be the dagger to finish off a rallying Marshall squad 67-60 Wednesday night at the UCF Arena.

“It’s only natural to want to take that shot with the clock winding down; you want the ball in your hands. I think I’ve been there a couple of times at the end of the game having to make clutch plays and today it went in,” said Jordan who scored 15 points although he only shot 33.3 percent from the field.

The play came with two seconds on the shot clock in the last few seconds of a very physical game, where emotions ran high and tempers even higher. Jordan caught the ball off an inbounds play, and made a three, with two defenders in his face.

One of those defenders, was Marshall’s DeAndre Kane, who was matched up on Jordan most of the night. Kane was not expected to make the trip down to Orlando, due to the death of his father, Tuesday morning.  Though averaging 16.2 points, Kane, Marsall’s leading scorer, only managed to score nine points.

The starting half consisted of both teams going on long streaks, with Central Florida jumping out to a 12 point lead early in the period, and the Thundering Herd fighting their way to a two-point halftime lead.

After a first half of poor shooting by both teams (neither team shot better than 42% from the field), the Knights came out energized in the second half, and started the period on a 12-2 run in the first 4:30 of the half.

Junior forward Keith Clanton scored a game high 20 points, including Central Florida’s first 11, and seven rebounds. Sophomore forward Isaiah Sykes had a double-double, with 10 rebounds and 15 points. Sykes’ best play of the game, a chase down block of Marshall’s Damier Pitts on a breakaway to the basket, received national attention.

The Thundering Herd were able to recover from the early onslaught to get within two in the last 48 seconds of the game before Jordan hit his shot.
“I don’t think any of us thought it was going to slip away because we all had confidence in one another,” said Spurlock. “We knew that we could pull it out. I think we outplayed them from the jump. We knew if we just executed down the stretch that we’d be fine.”

The win puts UCF at 18-6 on the season, and tied for second place in Conference-USA. The Knights will go on to face conference leader Southern Mississippi Feb. 11, while Marshall must regroup to face East Carolina.

“I’m happy for the win and proud of our guys,” UCF head coach Donnie Jones said. “I walked in the locker room after the game and the one word on the board was finish. That’s what you’ve got to do. We almost didn’t finish, but we did finish.”