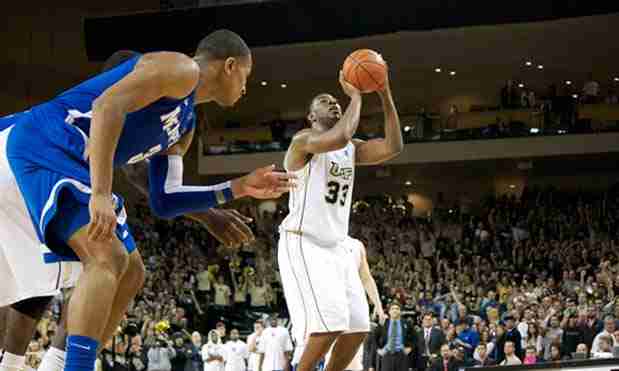 Juan Gutierrez / [email protected]
Keith Clanton’s and-one three point play with four seconds left in regulation lifted the University of Central Florida over the University of Memphis 68-67 Wednesday night in a Conference-USA showdown.This is UCF’s 16th straight victory at home, dating back to last season, and their first win against Memphis in their last 11 meetings.“I couldn’t be happier for anybody then Keith Clanton. Keith Clanton got fouled and I’m just happy he got a chance to go to the line and win the game for us; he made the free throw that counted for our team,” said UCF Head Coach Donnie Jones. “I’m really proud of our team, how they stayed together, stayed poise, and found a way to win this basketball game. Tonight was a great win for our program and a great win for our school. Memphis has always set the bar for this conference with what they’ve done and for our team to have the victory tonight is a great stepping stone to what we’re trying to get to.”

Clanton finished the game with a team high 23 points, shooting 75 percent from the field, and pulling down eight rebounds. Clanton, a 57.6 percent free throw shooter on the season, sank the go ahead free throw with four seconds left in the fourth quarter to provide the winning basket for the Knights.

“It was a good win for our program,” Clanton said after the game. “We just took it as one game but we know they’re a good school, and we haven’t beaten Memphis before. It was a good win but we have bigger goals ourselves.”

Marcus Jordan added 20 points and two assists while Tristan Spurlock chipped in with nine points off the bench, all coming from three-point range, helping UCF avoid losing back to back games for the first time all season.

UCF took a 41-38 lead going into halftime after having a great first half shooting percentage connecting on 15 of 29 field goal attempts (51.7 percent).

In a second half, full of runs by both teams, the Knights struck first by starting the second half on an 11-1 run, which gave UCF the largest lead of the night: 13 points with 16:53 to go in the second half.

The Tigers displayed resilience by responding with a run of their own later in the second half, chipping away at the UCF lead and eventually regaining their first lead, 64-63, since the opening half, with 4:11 remaining in the second.

“This was definitely a tough, gritty Conference-USA game,” said Jordan. “There are going to be a lot of tough games in this league where we’re just going to have to grind it out and find a way to win, and that’s what we did tonight.”

Despite the loss, Memphis still shot 51 percent from the field and buried 7 of 11 from three-point range. UCF shot 44.4 percent and connected on 8 of 20 from beyond the arc.

The Knights have an overall record of 14-4 for the season. With their record improving to 4-1 in Conference-USA play, they now move into second place in the conference behind only Marshall. UCF’s next game is Saturday Jan. 21, on the road versus another conference opponent, University of Alabama at Birmingham.