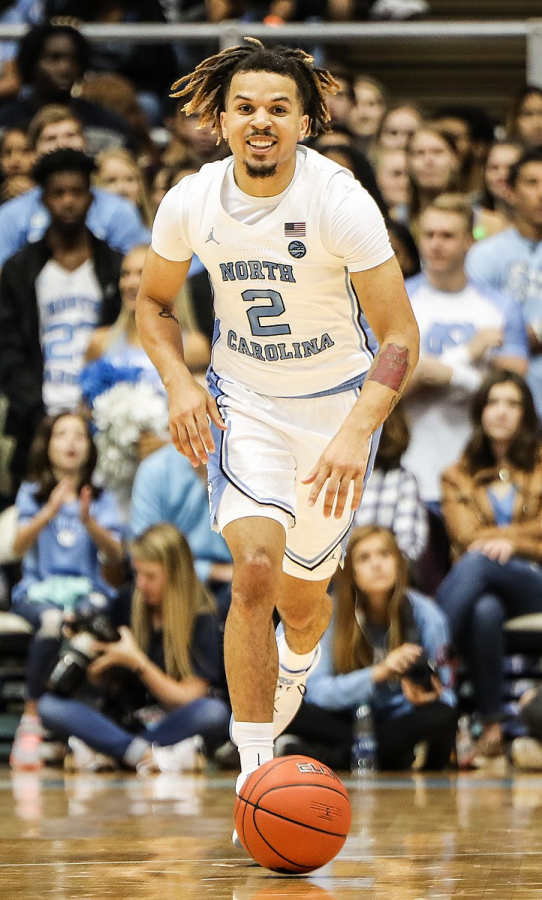 With the 15th pick of the 2020 NBA draft, The Orlando Magic select, Cole Anthony, from the University of North Carolina. A crafty guard with potential, Magic fans seem hyped about this pick, but how will he fit in the roster?

On Nov. 18, the 2020 NBA draft had finally arrived and players witnessed their dreams become reality, including Orlando Magic’s new point guard Cole Anthony as he cried tears of joy after a long difficult year. “I struggled a lot this year,” Anthony said on ESPN after he was selected 15th in the NBA Draft. “This was one of the hardest years of my life,” he added referring to the arthroscopic surgery he underwent earlier in the year. Now, it’s time to look at how he will fit on the Magic’s roster.

To Anthony’s strength, he’s an aggressive scorer that has the ability to create a shot for himself. Anthony can efficiently perform crafty crossovers and step-backs. He’s also known to knock down pull-ups with range, and change speed, direction, and initiate contact in the paint. In addition, Anthony has shown glimpses of competitiveness defensively and has the willingness to fight through screens. At North Carolina, Anthony shot 18.5 points per game and averaged four assists per game.

On the contrary, Anthony’s weaknesses are what will determine where he fits on the Magic’s roster.     According to ESPN, he’s more of a scorer than a facilitator at this stage. He tends to pound the ball too much and his shot selection has room to improve. Meaning, he isn’t always looking to pass the ball, even if a teammate has an open shot. ESPN says that Anthony “can make basic drop-offs and kickouts, but he’s still learning how to manipulate defenses.” This could cause issues with Magic’s starting point guard, Markelle Fultz, as he tends to share this style of play, and requires the ball in his hands also. The difference is that Fultz is also a facilitator as much as he’s a scorer, so this will not blend well if Anthony were to join Fultz in the starting lineup.

Furthermore, Anthony is a bit streaky as a shooter. According to ESPN, he shot 35% at the high school three point line on 464 attempts and 35% from 3 at the collegiate level. Although he possesses the ability to shoot from deep and rise up in the midrange, he seemed to be inconsistent in doing so in college. The Magic will see if Anthony is able to improve his consistency from the three point line as his career unfolds. Three point shooting is a skill that the Orlando Magic heavily needs. In the 2019-2020 NBA season, the Magic ranked as one of the lowest three point shooting teams in the league at the 25th spot.

So where exactly does Anthony fit on the roster given all his strengths and weaknesses? The best bet for the Magic is to play him off the bench with Terrence Ross. This would deliver the perfect combo of a one-two punch of scorers that can potentially be too much to handle for opposing teams.

The Orlando Magic’s roster would have more depth on the bench with scorers and defenders, and since Anthony’s game is similar to Fultz, it would be as if Fultz had never left the game. Josh Robbins, senior Orlando Magic writer for The Athletic, also acknowledges this possibility as he tweeted “How does UNC guard Cole Anthony fit into the Magic roster as it stands at this moment? A possibility is that Anthony will back up Markelle Fultz and then play alongside shooting guard Terrence Ross in the backcourt when Orlando goes to its second unit,” on Nov. 18.

Maybe the Orlando Magic isn’t receiving Micheal Jordan out of the University of North Carolina, as UNC is Jordan’s alma mater, but they’re getting a crafty backup guard with great potential to deliver a barrage of points off the bench. Anthony could be the Lou Williams of the Magic in his rookie season.