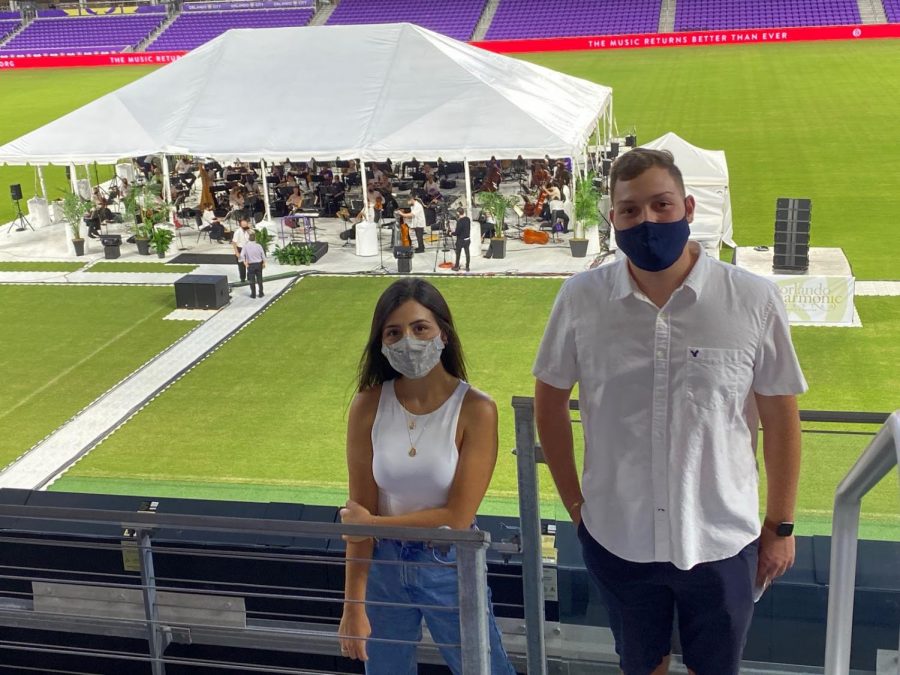 Musicians and their instruments in the center of the pitch — this was the scenario seen on the night of September 26 at Exploria Stadium, home to the Orlando City SC and the Orlando Pride.

The concert, “Opening Night with Simone Porter”, kicked off its 2020-2021 season and was the orchestra’s first live performance since the beginning of March of this year after the COVID-19 pandemic led to the cancellation of the remaining 2019–2020 Season,” It was an emotional evening for everyone,” Paul Helfrich, Executive Director of the Orlando Philharmonic Orchestra, said. “I just felt so good watching people come in the doors prior to the concert.  A concert is about more than music; it’s about community and being able to interact with other people. ”

For the first time in history, a professional orchestra performed a full concert in a U.S. soccer stadium — an unusual location for the orchestra. The decision to perform in this unconventional venue came after the announcement by Bob Carr Theater, the original location for Opening Night, closing indefinitely due to the pandemic. The Orlando Philharmonic Orchestra and Exploria Stadium were able to form a new partnership and are thrilled to blend the performing arts and sporting worlds in the Central Florida community.”

“We are used to managing sports events, but all the details about this type of event are very different from our day to day job, such as setting up the stage on the sacred soccer grass field,” said Fred Pollastri, Chief Operating Officer for Exploria Stadium  “We are really proud to have hosted such a concert at Exploria Stadium and to be a key player in having live music concerts back to people’s lives, ” Pollastri added.

Violinist Simone Porter was the featured soloist for the evening’s performance of Mendelssohn’s “Violin Concerto,” part of the repertoire. “It’s great to be back on stage after six months without performing for people. I can only define it tonight in one word — gratitude, ” Porter said during her speech to the audience.

Brothers Giovanna and João Pedro Massela, both international students at Valencia, approved the unique experience of enjoying an orchestra in the bleachers of a stadium. “It was the first time that I went to the stadium and didn’t cheer, the noise came from the pitch and not from the fans, who were all the time in silence, enjoying the classical music,” João Pedro said. “It was great to leave the house for a while and witness the orchestra return to the stage. Everything was well organized, with all the security measures,” Giovanna added.

Following the entire safety protocol, attendees were socially distanced throughout the stadium, temperature was checked upon entrance, and face masks were required in the venue.