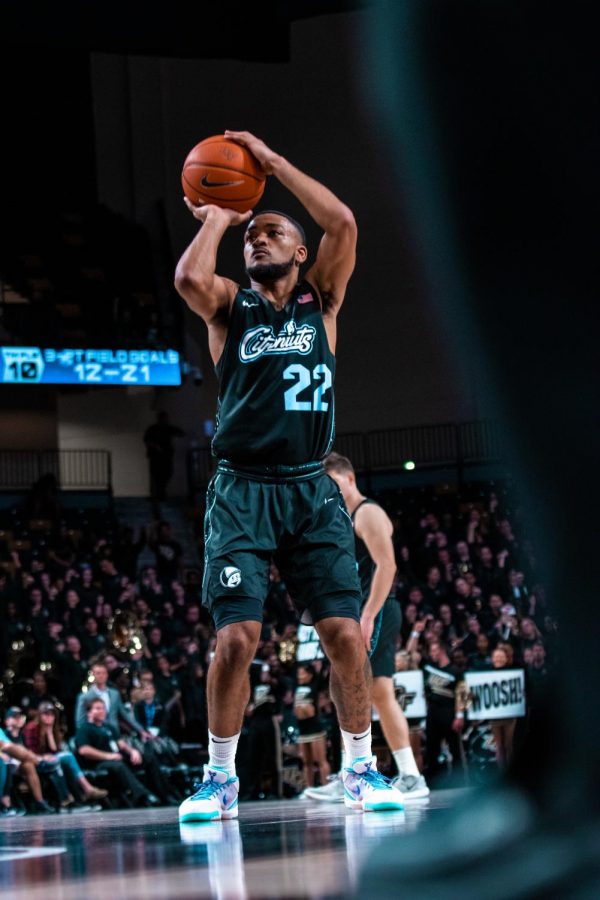 Darin Green Jr. made six of his seven three-point attempts against the Tulsa Golden Hurricanes. Photo by Joey Weierheiser.

Behind 26 points from Darin Green Jr. and making 57 percent of their three-pointers, the UCF Knights were able to get past the Tulsa Golden Hurricanes 83-75.

“We beat a good basketball team,“ UCF head coach Johnny Dawkins said. “A basketball team that’s been playing as good as any in our conference throughout conference play. I’m proud of our guys’ effort. It takes a heck of an effort to play them and to score what we scored tonight. Just really happy that our guys were able to accomplish a good victory.”

“I was hitting it in warm-ups, I kinda felt it,“ Green said. “Matt [Milon], hit his first [and] that kinda got the team going.”

“Darin was terrific, of course,” Dawkins said of his performance. “When you have nights like that when you’re shooting that well, there’s not that many bad shots because he’s hitting everything.”

Heading into the game, Tulsa was a top 10 team in allowing threes, holding opponents to just 20 percent when shooting from beyond the arc.

“It’s so difficult to play against their defense because they mix defenses, they have an unbelievable match-up zone,” Dawkins said. “You have to move your body, create good spacing, you have to make sure that you play for each other on the floor and I thought our guys did that.”

UCF led by as many as 18 points in the second half, but Tulsa managed to storm back, capitalizing on multiple UCF turnovers after inbounding passes. The lead would get cut down to 79-75 with 14 seconds left in the game, but Tulsa wouldn’t get any closer though, as free throws from Green and Dazon Ingram put the game out of reach.

“We have to talk about late-game situations again this week and we have to cover them again this week,“ Dawkins said after their last two wins nearly slipped away in the final seconds. “The only way you can learn is to be in those situations. We’ve been in a few of them where we’ve had leads and we’ve had to hold onto them to close games and that’s important.”

Tulsa will be back in action this Wednesday when they host the East Carolina Pirates (9-14, 3-7).

UCF will look to extend their winning streak this Thursday when they host the Wichita State Shockers (17-6, 5-5).