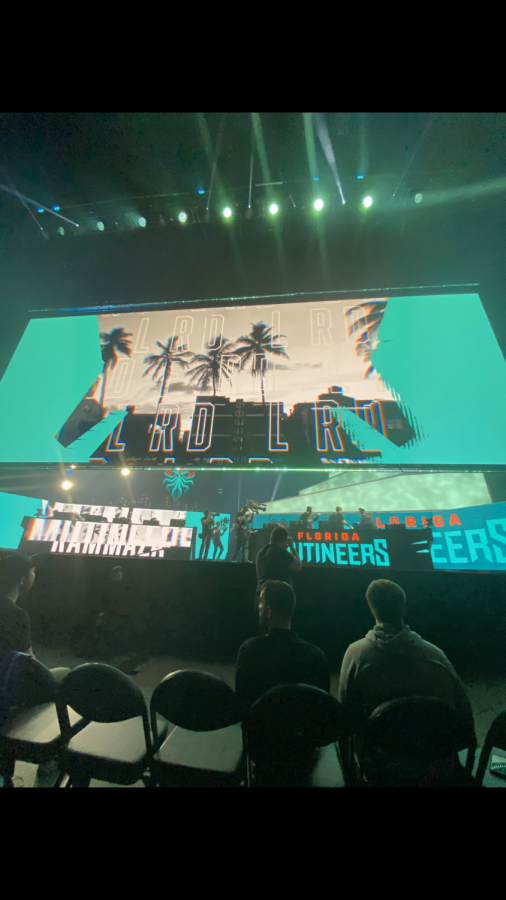 Mutineers after their first win of the series on Rammaza Search and Destroy vs. the Seattle Surge

The Florida Mutineers started off the inaugural 12-team Call of Duty League (CDL) with a 1-1 record, beating the Seattle Surge on the first day but falling to the Los Angeles Guerrillas on the second.

In the CDL, the matches consist of best-of-five series – five games or maps. The first team to win three maps wins the series. Each map is a different game mode, and the maps are picked by the teams while the game modes are static.

The Mutineers, a young, inexperienced squad, faced off against the Seattle Surge who have attended a combined 54 major tournaments. Seattle is led by Damon “Karma” Barlow, who is widely considered as the best Call of Duty player of all time.

In Game One of St. Petrograd Hardpoint, the Mutineers held the lead for a good portion of the map but fell behind a surging Karma – who came up clutch in the Surge’s game one victory over the Mutineers, posting a 1.62 K/D and being named MVP of the match.

In Game Two of Gun Runner Search and Destroy, the match ended in a tie. Florida had a very aggressive approach to the map, with pushes to the B side on both offense and defense, which forced the Surge to make unwanted decisions. The Mutineers closed out the map 6-3.

Game Three was Domination at Gun Runner. The Mutineers’ Frosty started off the game hot with a nine kill streak, but even with his heroics for the first few minutes of the first half, the Mutineers fell in a nail-biter to the Surge, 188-184.

Seemingly disheartened by the third game, the Mutineers had a slow start to game four – Azhir Cave Hardpoint. Down by 70-80 points, the Mutineers managed to mount the comeback led by the duo of Skyz and Prestinni and later finished off by a huge flank by Havok in the last hill – winning the map on a score of 250-215.

In the fifth game of the series, Rammaza Search and Destroy, the Mutineers were led by a dominant performance by the duo of Prestinni and Havok, who shut out the Surge in a 6-0 win. The Florida Mutineers first series of the CDL was 3-2 victory

“I think before we came we really focused on Search and Destroy, we played like almost every single night against whoever we could,” Preston “Prestinni” Sanderson, Florida’s ex-Call of Duty World Champion, said during his post-game interview with Chris Puckett. “Just kind of drawing up strats and doing whatever we could. And we kind of preached to ourselves that if you’re going to do something, do it with your teammate and that’s all it takes.”

On the second day of the Inaugural CDL weekend, The Mutineers faced off against the Los Angeles Guerrillas, who had a chip on their shoulder after a controversial loss against the hosting Minnesota RØKR in their match the day before.

The Mutineers had a strong showing in game one, winning in a score of 250 to 176 in Azhir Cave Hardpoint – led by the early slaying power of Prestinni and Skyz.

Even with a quick 2-0 start to Gun Gunner Search and Destroy in game two, the Mutineers lost in Round 11, which tied the series at one apiece.

In Game Three, the Mutineers once again squandered a hot start and fell in Hackney Yard Domination, 218-171.

The Mutineers jumped into the lead of game four of Gunner Runner Hardpoint, but the Guerrillas quickly regained the lead back. The Mutineers had good third and fourth hills, to manage to win a nail-biter with a score of 250-238.

Even with a quick 4-1 start to game five of Arklov Peak Search and Destroy, the Mutineers fell to the Guerrillas 6-4, losing their second series of the weekend and finishing 1-1 in the standings.

The Mutineers are currently fifth in the standings and will be looking for more wins during the third weekend of the CDL in Atlanta on Feb 22.