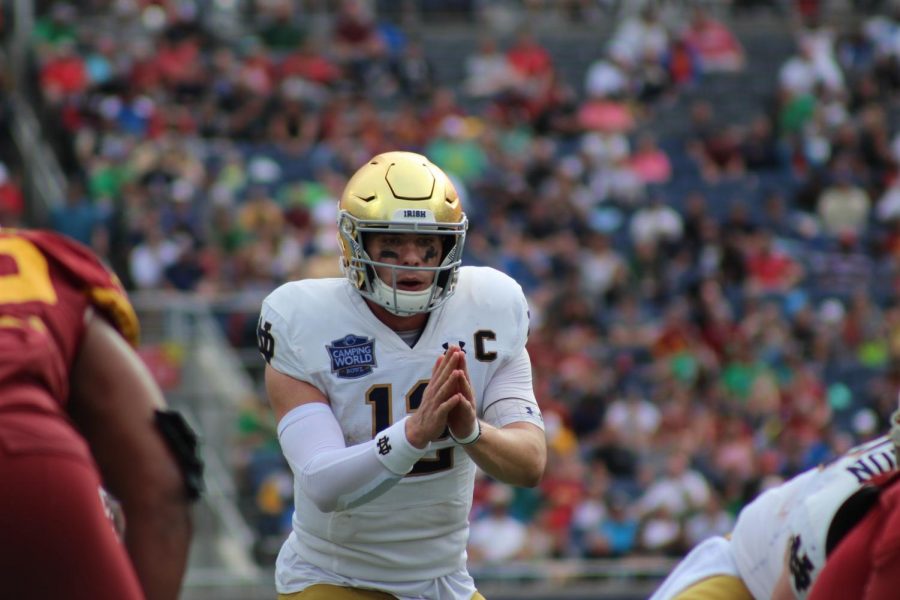 Notre Dame Quarterback Ian Book completed 20 of his 28 passes for 247 yards and a touchdown.

Notre Dame’s ability to convert turnovers into points along with a dominant performance from Chase Claypool proved to be the difference as the Fighting Irish beat the Iowa State Cyclones 33-9.

Claypool was named the MVP with seven catches for 146 yards and one touchdown.

“I appreciate everyone, speaking to my family, my friends, you know, everyone who supported me throughout the years to get me to this point,” Claypool said. “For a long time, something like this was a dream, you know, and it’s something that was a dream that couldn’t be reached. But, you know, I hope I’m an example and live an example of someone if you just keep on dreaming, then that dream will come true.”

Quarterback Ian Book completed 20 of his 28 passes for 247 yards and a touchdown. Tony Jones Jr. had 11 carries for 135 yards, including an 84-yard touchdown which was the longest run in Notre Dame History for a bowl game. The Fighting Irish rushed for 208 yards.

Defensively, Notre Dame forced and recovered two fumbles and had one turnover on downs. The Fighting Irish also had four sacks.

“I thought the defensive performance when you hold an offense that put 40 points on a team that’s playing in the playoffs in Oklahoma, to no touchdowns, you know, you can’t hide from that,” Notre Dame head coach Brian Kelly said. “A team that is a prolific offense, to not score a touchdown today, they had plenty of time to prepare. The defense is without some really good players as well. And [we] just did an outstanding job today.”

Jonathan Doerer made all four of his field-goal attempts, including a 51-yard field goal.

Connor Assalley accounted for all of Iowa State’s (7-6, 5-4), points with three field goals made.

“Obviously, there’s about seven or eight plays in this football game that really dictated the outcome of the football game in some ways for us that allowed us to be inefficient,” Iowa State head coach Matt Campbell said. “And, unfortunately, that’s really what’s held us back at times this football season from becoming the team that we do have the ability to become.”

Brock Purdy completed 17 of his 30 passes for 222 yards for the Cyclones. Purdy has been dealing with a high ankle sprain since Iowa State’s 34-27 loss to Oklahoma State on Oct. 26.

“Today I thought he was the most healthy he’s been since probably the midpoint of the football season, but, you know, Brock’s dealt with that,” Campbell said. “And I think that’s part of the process of playing quarterback.”

Iowa State will start next season by hosting the South Dakota Coyotes on Sept. 5.

Notre Dame opens next season in Dublin, Ireland when they play the Navy Midshipmen on Aug. 29.