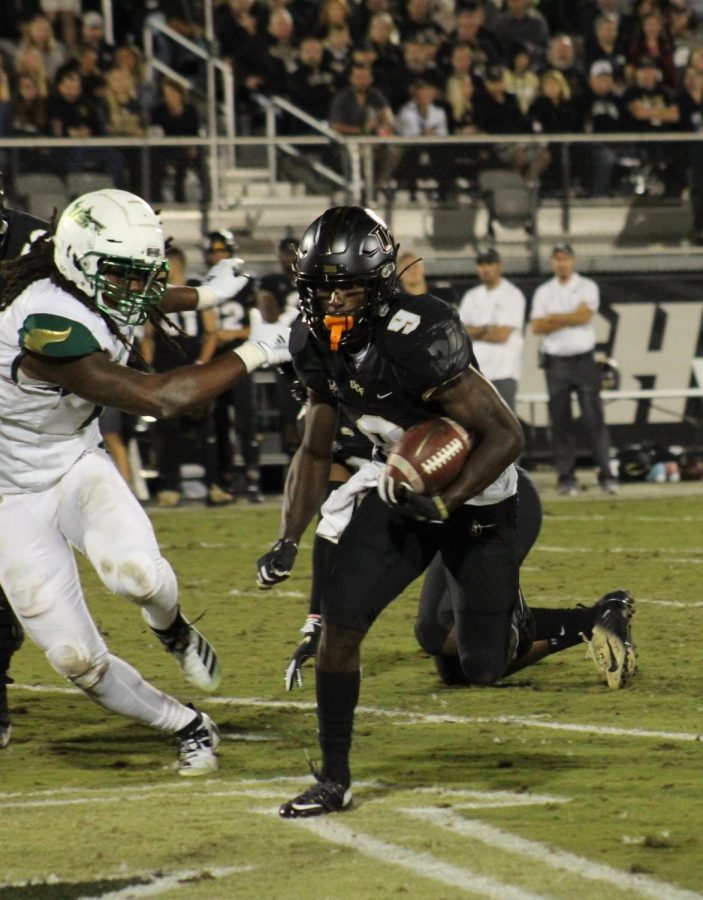 Adrian Killins Jr. (pictured) racked up 115 yards and a touchdown.

In the rivalry dubbed the “War on I-4” the game resembled more of a one-sided beatdown when the UCF Knights celebrated their senior night with a 34-7 drubbing of the USF Bulls.

With the win, UCF (9-3), has beaten USF (4-8), in three straight games. UCF has also gone three consecutive seasons without losing a game at home.

Dillon Gabriel had an efficient performance, completing 23 of his 39 passes for 270 and two touchdowns—both of which were completed to Gabriel Davis.

“Really good,” Heupel said of Gabriel’s performance. “[Gabriel was] decisive early, I thought he recognized some things coverage wise that were maybe a little bit different than what we had anticipated maybe early in the football game. Did a good job in the run game, took care of the football, a lot of really good things from him tonight.”

Adrian Killins had an electric performance in his final game at Spectrum Stadium, rushing for 115 yards on 14 carries, including a 35-yard touchdown. Darriel Mack also had a rushing touchdown.

“It’s been a long time coming here,“ Killins said. “I remember enrolling June 27, 2016, as a freshman – I can’t believe I’m a senior now [and] that was my last game at the bounce house. The moments that I cherish out there with my brothers I’m never going to forget and embracing knight nation, walking out there with my family on senior night and whatnot, it was a lot of emotions.”

Davis had eight catches for 106 yards plus the aforementioned two touchdowns.

After the game, Davis was non-committal about whether he would return for his senior season.

“It’s something I’ve been thinking about with family,“ Davis said on whether or not this was his last home game as a Knight. “I’ll be able to talk to them about that and see what I’ll do moving forward.”

The Knights defense turned in one of their best performances of the season – forcing three turnovers. Nate Evans had a fumble recovery on a bobbled snap while Eriq Gilyard and Antwan Collier each had an interception.

“Our defense was suffocating the entire night,“ Heupel said. “Defensive line changed the line of scrimmage…Did a great job in third-down situations as well…Defensively [it was] Evan Fournier definitely our best effort from start to finish.”

The Bulls lone points came from a one-yard run from Johnny Ford on fourth down with 7:26 left in the 3rd quarter.

Having missed out on the AAC championship game, UCF will now wait until December 8 to see which bowl game they’ll be playing in this postseason.