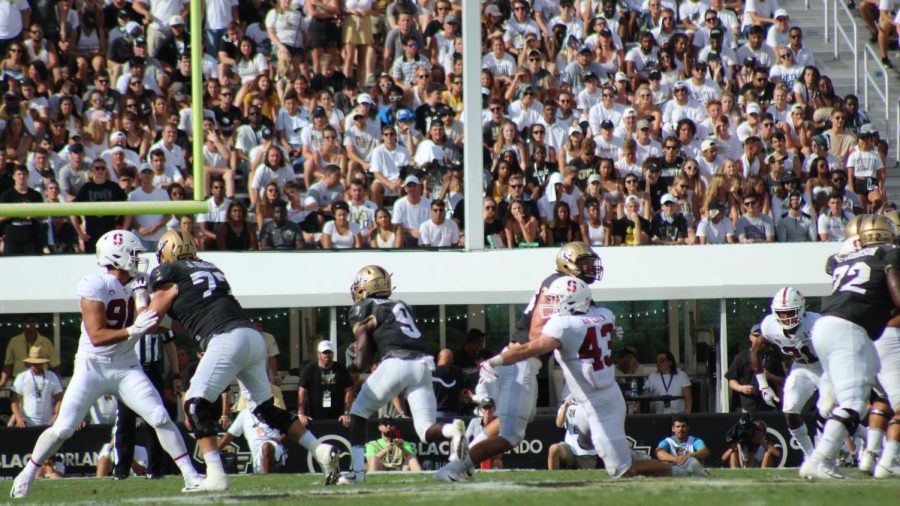 The No. 22 UCF Knights once again dominated at home, with 28 points scored in the 1st quarter and four turnovers on defense for their first AAC win of the season – a 56-21 shellacking of UConn to shake off last week’s upset to the Pitt Panthers.

“Obviously I’m excited about the way we played,” UCF (4-1, 1-0) Head Coach Josh Heupel said of his team’s performance. “In the first half, I thought our ones did well in all three phases.”

The Knights defense stepped up in a huge way with their four turnovers against UConn (1-3, 0-1), which included an interception by Nevelle Clarke, who it ran back 48 yards for a touchdown.

“Turnovers were huge early defensively,” Heupel said. “There’s more out there as far as turnovers go too. [We] dropped a couple but we’re pleased with the way they played.”

Adrien Killins rushed for 77 yards on three carries with, 75 of those yards coming on a touchdown run. With those totals, he is now tied for 6th all-time in touchdowns and 9th all-time in rushing yards in UCF school history.

Dillon Gabriel completed 11 of his 16 passes for 281 yards and three touchdowns.

Darriel Mack Jr. made his first appearance of the season at quarterback, throwing one touchdown in relief of Gabriel.

“[Mack] is a guy that has gotten back, been healthy, got a bunch of reps and tonight was really good for him to go out and play in his first live action of the year,” Heupel said of Mack making his first appearance of the season.

“In this game, you’re only as good as your next one,” Heupel said. “Players can enjoy this one tonight, they’re back in the building tomorrow. It’s a short week, you gotta forget it real quick…We gotta move on to a really good opponent.”

UCF hasn’t lost a game at Spectrum Stadium since November 2016. They will play the Cincinnati Bearcats on Friday, October 4 in Orlando in another test against a conference rival.