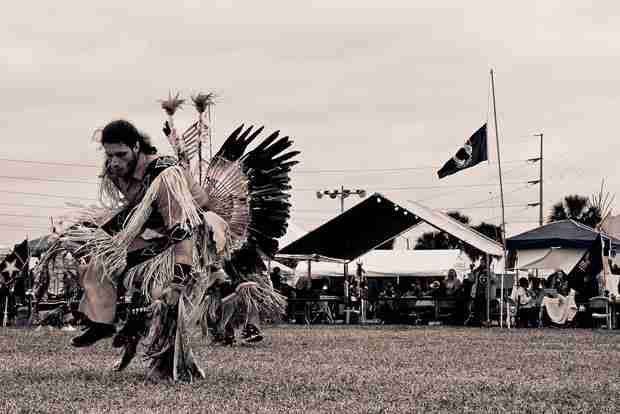 By Fred Lambert / [email protected]
The aroma of kettle corn mixed with the sounds of tribal ceremonies across the Central Florida Fairgrounds on a deary weekend in early November. White tents stand around a wide, round opening where dances are performed in full-feathered regalia to the beat of drums and songs chorused in native tongues. Tribes from all over the United States, including Cherokee, Kiowa, Seminole, Cheyenne, Lakota, Creek and Taino, come to the space to join in on the spiritual gathering known as the “powwow.”

Powwows occur all throughout the United States. Orlando’s annual gathering, presented on behalf of the American Indian Association of Florida, is in its 25th year. The event goes on for three days, and is considered to be a social, spiritual and educational interaction where people come together to meet, tell stories, and honor elders and warriors. It brings in a hearty mixture of both full-blooded natives and mixed ethnicity members alike, and is open to the public.

“It’s an educational program,” said arena director G.T. Martinez, 64, a Creek-Cherokee-Apache from Georgia who oversees authenticity of dancer regalia. Martinez has attended the Florida powwow for six years. “There’s probably over a hundred-and-fifty different nations of people here.  To us it’s a gathering of people, of friendship. To everyone else it’s educational; to let you all know that we still have our old ways and we still practice our religion, our songs.”

“Soaring Eagle” Martin is from Miami, Oklahoma (pronounced “Miama”), and has been the President of the Native American Indian Society since 2003. His duties, bestowed upon him by popular vote, entail putting out fires, acting as an insurance liaison for native-blooded members, and being a scapegoat for everything that goes wrong. “Whenever there’s a problem, that’s what Presidents are for; so they have someone to blame it on,” he joked.

His wife “Shining Stone” is not of true native heritage, but, as explained by “Soaring Eagle,” a woman who is married to a Cherokee for over 15 years becomes an official member of the tribe.

Both travel to at least 15 powwows per year selling the arts and crafts they make by hand.  “This is what we do to keep ourselves out of trouble,” she said.

Another nomadic tent-owner was Lurch Pagan, 65, a Taino from the Great Lakes region who visits powwows up and down the east coast, from Florida to New York and Connecticut, selling crafts like spears and bows for a living.  “I used to do 40 a year but I do 36 now,” he said. “I produce all of my things, and I have friends who are good at what they do.”

Pagan says that it takes time and effort to create some of the traditional weaponry and regalia, which explains the prices which he says people try and barter down. One of his authentic-looking bows with a single arrow cost $85 dollars, but looked every bit like a genuine artifact.

Pagan explained that his people, the Tainos, were a tribe that spanned across southern Florida and the Caribbean and even to the equator until they were scattered by European colonization. He said many commonly used words in the English language, including “hurricane,” “barbecue,” and “canoe,” were traditionally Taino words. “That’s why I tell people: ‘You don’t speak English, you speak American,’” he said with a laugh.

Duane Whitehorse, a Kiowa, has put 80,000 miles on his truck since last April, traveling to powwows “from Colorado to Idaho to California.”

Whitehorse claims to have been dancing for 65 years, despite being only 64. His mother danced when she was pregnant with him. “Nobody on the east coast has been in these dances longer than I,” he said. A crowd rimmed the middle opening as he talked, and dancers stomped to drum beats and tribal singing.

“Traditional dancers are more or less telling a story,” Whitehorse said, “of a hunt, a war story; something they did in combat.” He explained that after an experience, warriors and hunters in most tribes weren’t allowed to brag about what they did. Instead they would express the arduous journey through ceremonial dance. If they boasted, they could be stripped of their property. “Ninety percent of the songs are about veterans,” he said.

Whitehorse, who periodically speaks at schools like the University of North Florida and Florida Atlantic University, for pay ranging up to $2,500, was clad in regalia highlighted by eagle feathers arrayed in a wide crest on his back and neck. “We believe that the eagle will carry our prayers closer to god,” he said, explaining the significance of their feathers. “Each one of these feathers – the tail feather of the Golden Eagle – contains the spirit of a warrior. If one falls on the ground, we have to do a ceremony to pick it up, because that means a warrior somewhere in the world has died.”

The element of prayer is thick throughout powwows. Even the word “Indian” comes from the Spanish term “Indios,” or “en dios,” meaning “in God.” Whitehorse explained that Columbus couldn’t have been looking for India, which was at the time called Hindustan.  When he hit land in the Caribbean, discovering Taino tribes, he sent word to the Spanish throne that “these people were ‘with God,’” according to Whitehorse.

The spiritual gathering, which started Friday and lasted throughout the weekend, was interrupted briefly when heavy showers sporadically soaked the area Sunday. Eventually the sun came back out and the ceremonies continued – as they probably will at next year’s powwow.

Diverse varieties of Native Americans like Lurch Pagan and Duane Whitehorse can then once again drift from across North America to freely exercise their culture, sell the crafts of their people, and unite to enlighten the Central Floridian public on a way of life that isn’t as far-gone as we may think.