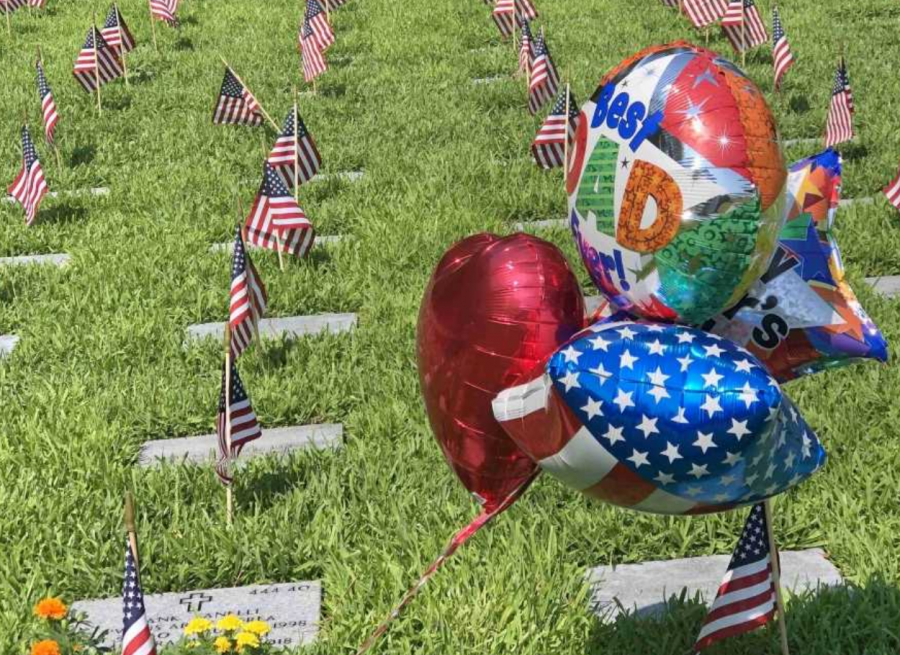 It’s an uncomfortably hot Monday morning and I know that I’m getting close to the Florida National Cemetery when dozens of motorcycles with American flags waving on the back start passing me on I-75.

Inside the cemetery, past the gates and police directing traffic, there are hundreds of them wearing black leather vests with their group name and insignia displayed on the back. Near the pillars of cremated remains, I watch for about five minutes while a seemingly endless number of Florida Defenders exit their bikes and walk a path to the assembly area.

There are also families, dads with children sitting on their shoulders and moms pushing strollers. There are also a lot of old men wearing hats that signify their personal history: “Vietnam Veteran,” or “First Calvary.” Some of them are holding hands with their wife and some of them alone.

Many are scrambling to call dibs on a shady spot under the gigantic oak trees before the ceremony begins. The sun hangs omnipresent directly above all of our heads. It’s one of those Florida days where nobody wants to be caught outside. Yet here we all are.

Others are navigating the fields of white marble tombstones. Some are just wandering around. There’s an older man with an unkempt, greying beard wearing a “Navy Dad” tee that calls over to his wife.

Others know where they’re going. I watch a family place a bouquet of flowers over the grave of Ronald Freeman. Freeman was 25 when he was killed in action in Afghanistan.

Near Freeman’s grave, Gary Stellmach is dressed in the uniform of Confederate infantryman and standing with a Parrot rifle – an artillery piece used in the Civil War that’s nearly the size of my car. I’m a little worried about the 73-year-old in the heat and under all those layers, but he seems in as chipper a mood as anyone.

Stellmach is a Civil War reenactor and Vietnam veteran, and today he’s going to help fire the cannons at the end of the ceremony. It’s his first Memorial Day at Florida National Cemetery, but it won’t be his last. Gary and his wife plan on being buried here.

It was his wife’s idea, Gary tells me. She made all the planning and preparation and he just nodded along.

“She was my first redhead,” Stellmach tells me with a mischievous grin. “First and last. A redhead and a Gemini, so you can imagine that I’ve had an interesting life.”

Garry Lee and his wife, Gloria Lee, also plan on being buried here. They both served in the military, Garry did three tours in Vietnam for the Marine Corps. We’re overlooking a field of hundreds of graves under the shade of a tree-line and he’s telling me about how he got out of the Corps.

“My wife had already gotten out because back then you couldn’t have a child and still be in the military,” Lee tells me. “So, I had 6 months left and then I was going to re-enlist and my monitor up in D.C. called me.”

“He said, ‘Hey, Gunny, are you going to re-enlist?’ and I said, ‘All intentions, yes, I’ll re-enlist. And he says, ‘Well, I wanted to give you some heads up. If you re-enlist your squadron has already requested you back. Do you know what that means?”

A few minutes before the ceremony is supposed to begin, the assembly area is now surrounded by close to a thousand people.

It begins with a speech welcoming everyone and thanking them for coming out, and then a prayer from a Reverend and Gold Star parent, and then a few more speeches. One of the speakers misstates that we’re currently at war with Iran. Me and a dad that I’m standing next to exchange glances, and everyone else either ignores it or doesn’t notice.

Rep. Daniel Webster couldn’t make it for the ceremony, neither could Sen. Marco Rubio. Both said that they had other engagements for the holiday, but both had their letters read aloud before the Hernando High School band played a few songs. They were followed by a very long bagpipe performance.

About ten yards away from me stands a man with long blonde hair and wearing an Army dress jacket, blue jeans, and black boots. As the bagpipes go on, he begins to cry. Family members walk up to console him. An older man, maybe his father, puts his hand on the young man’s shoulder and rubs his back.

It’s hard to pay attention to that, though, because two Vietnam veterans to my immediate right have hit it off and are giggling with each other like schoolboys. They’re talking about the kinds of whiskey that they liked to drink when they were younger. They’re cracking jokes and reminiscing about the good old days. One’s telling the other about some stuff he once tried in Colombia, and how it was the strongest alcohol he’s ever had. One affirms that he refuses to drink Scotch.

That was the entire crowd for the ceremony. Some watched, stone-faced, caught up in the remembrance of those that died for their country overseas. Others were occupied with their squirming child or checking their phones out of boredom. There were a couple of baseball games going on, and I’d be the first to admit that I was itching to see how those were going after eleven minutes of bagpipes.

A half mile away from the assembly area, Julia Colon and I sit on a bench overlooking one of the smaller graveyards. It stands out to me how picturesque they all are, all the grass is perfectly green and well-kept.

Her parents, Arnold and Lena Banta, are buried here, although she hasn’t gotten to their graves yet. They both served in World War II, Lena as a clerk and Arnold in European Command Intelligence, and they met on a half-empty bus. Arnold asked Lena if the seat next to her was taken and she said no. And 70-something years later, I’m sitting with their daughter.

We watch a family of four, a mother, a father, and two young boys, scan the tombstones. Eventually, they find the one they’re looking for and lay balloons before it. The mother takes a picture of the other three. It takes a few attempts, and she scolds her boys in between to at least look appropriately solemn for the picture.

While a speaker drones on across the graveyard from us, Garry Lee tells me about his son, the one whose conception forced his wife to leave the force. He’s currently serving his 28th year in the Marine Corps.

Lee tells me about how his son was wounded in Iraq – blown a hundred feet out of a Humvee and “needed his back and hips replaced.”

“The Marine Corps wanted to release him on medical,” Lee tells me. “And my son says to me, ‘My god, Daddy, I don’t want that.”

Lee’s son was able to find a Major that would plead his case to headquarters. And after some recovery, he called his father with the good news.

“I’ve got the best news I’ve ever had,” the son said to father. “They’re going to let me re-enlist three years at a time if I can pass a physical. I’ll have no problem with that.”

Lee’s son plans to retire in June. Garry, who suffers from COPD, is a little bit winded from all the talking. I think that being here is making him consider his own mortality a little bit.

“I know I haven’t got long left,” he says to me, casually, as if he’s telling me what he had for breakfast. “I’ve got Agent Orange in my respiratory system. It’s causing cancer in other places. I’ve already had one heart surgery. I’m just trying to get everything lined up for my wife.”

As if on cue, Gloria and their two grandchildren, Anthony and Olivia, come walking up. Gloria is incredibly sweet, the kind of grandmother I imagine everyone wishes that had, and the kids are very polite. They’re in elementary school, and Gloria makes it a point to let me know that both of them are in gifted classes. 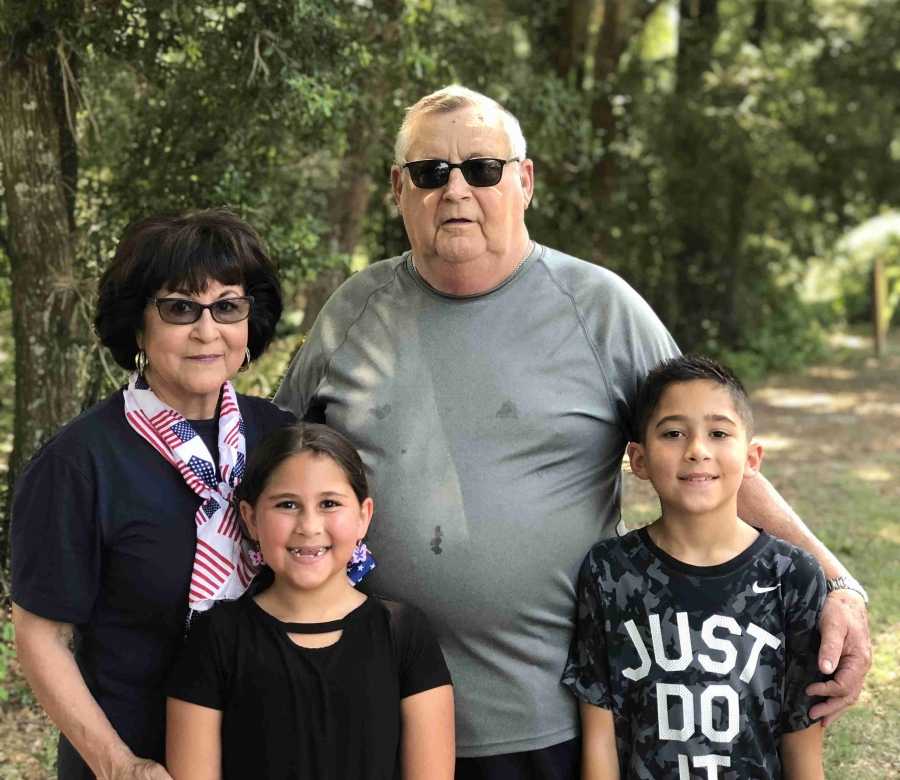 Garry and I look upon the keynote speaker as he finishes up from across the field of marble, white tombstones that glimmer in the sunlight.

“Why be buried here, out of anywhere?” I ask him. It’s something that’s been nagging in the back of my head all day, but I don’t know how to ask the people I’m speaking to.

The old man sighs for a moment and then smiles at me like it should be obvious.