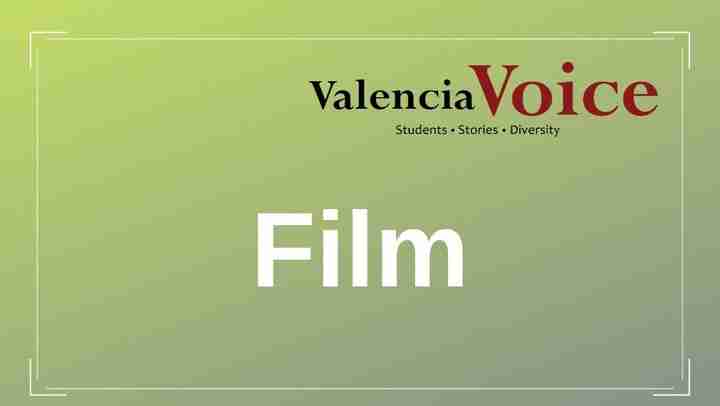 On April 13th, 2019 film fans, students, and Valencia College alumni gathered at the 24th Annual Valencia Film Celebration on East Campus. The all-day event not only featured the work of several students and alumni on the “big screen” of the SAE building, it was also an opportunity to attend educational workshops and raise money for future film projects.

Before the feature presentation of the full-length film Missionary, the screening room played a range of student-made music videos and short films.

If you missed some of these films, here are a few brief reviews:

Directed by T. Miller and filmed at Valencia East Campus, Courage to Stand is a down-to-earth religious film that encourages the audience to stay true to their beliefs. The main character is very likable and easy to relate to. When his faith is challenged by his professor, he isn’t afraid to state his opinions and argue for his faith – regardless of the consequences.

Huvyr was my personal favorite of the short films. It is a clever film with an unexpected, dark twist. Also filmed on East Campus, Huvyr follows a young college student who stays on campus late to study. The slightly-futuristic technology plays a huge role in the film when she is confronted by two men in a parking garage. Not only did I appreciate the story-telling, I felt the casting and cinematography was pretty spot-on. Huvyr is a short film worth rewatching.

I enjoyed this short film following a team of campy superheroes. Directed by Dusty Socarras, Codename C.R.O.S.S.F.I.T. explores the world of four superheroes who regularly fight cheesy villains and their henchmen. The film was the longest of the short films I saw during the festival, but it stayed entertaining the whole way through. I want to see what wacky adventures the members of the Crossfit Gym go on next. It’s got that nostalgic, over-the-top goofy superhero feel to it that is hard not to like.

Like Huvyr, Look Twice is a short film worth watching more than once. Directed by Hector Hernandez, this thriller follows a young girl as she tries to escape from dangerous home intruders. One thing that stood out to me was the overall storytelling. Despite having a run time of less than 7 minutes, the film quickly establishes who the characters are and gives us a reason to root for the girl. It puts us right into the action yet takes the time to give us flashbacks when we need them. It’s suspenseful and very well-cast.

Customer Service was the shortest film among the ones I saw, but it was definitely the most relatable. While I am not a villain in a super hero movie trying to murder my nemesis, I have been put on hold before. Who hasn’t? This film is so funny that it would be a shame to spoil the key plot points here.

As a fan of suspense movies, I was excited that the feature presentation was going to be a thriller. While Missionary started off slow, the second half of the movie was creepy and dramatic. I grew attached to Katherine (Dawn Olivieri) and genuinely wanted to see her family get back together. I knew going into the film that something bad was about to happen, but I genuinely wanted her and her family to be okay in the end.

Elder Brock (Mitch Ryan) was a very sympathetic character at first, so it was interesting to see him slowly become more and more psychotic as the film progressed.

One thing that I liked about this film was that it was filmed in Central Florida. Very few films show the rural parts of the state and tend to focus on the more touristy aspects of the area. While Katherine and Elder Brock do visit a luxury hotel, the film has more of a small-town feel to it. This made my favorite scene, which took place in a diner, more believable and added a lot of local flavor to the storytelling.

The film was produced and co-written by Valencia College professor Bruce Wood, so it’s easy to see why it was chosen as the feature presentation for the festival.