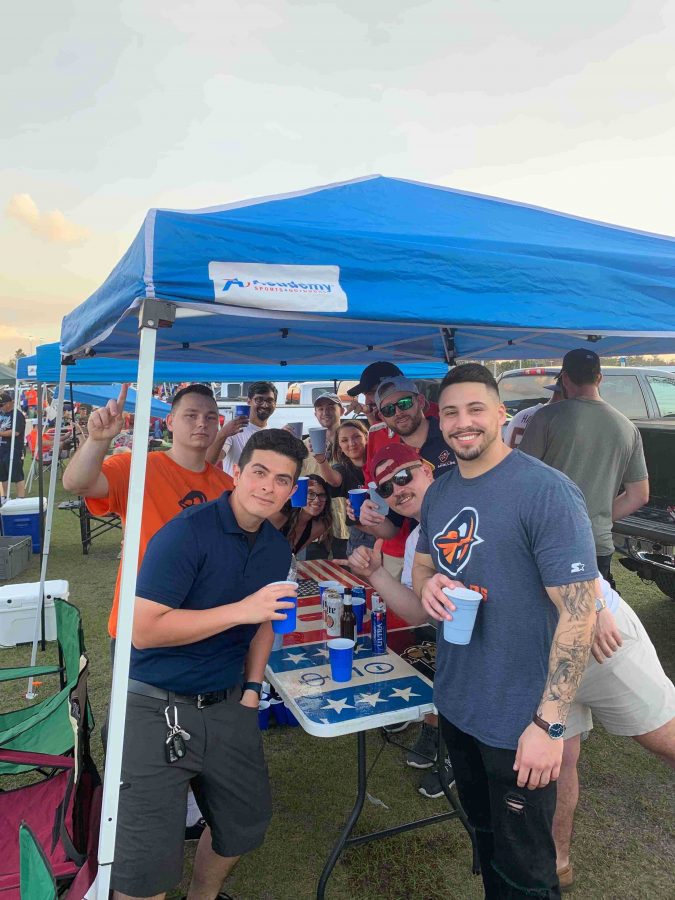 Fans tailgate before the Apollos faced off against the Memphis Express.

Family, friends, and fans gathered outside UCF’s Spectrum Stadium to drink beer, flip burgers, and play cornhole while tailgating before the hometown Orlando Apollos, the town’s newest sports team, defeated the Memphis Express in a scene reminiscent of a Knights game.

UCF football fan Gregory Bourbonniere played beer pong with his friends under a canopy, in the exact spot he and his friends tailgate at before watching their beloved UCF Knights.

“So we’re in this tailgate section [lot E7] right, and [at] UCF games you’re in a more crowded-type area. So we keep it a little docile,” Bourbonniere said. “You gotta drink your beers and play your music loud.”

Bourbonniere had a positive outlook on the future of the American Alliance of Football, which is only three weeks into its inaugural season. “All of these teams in AAF should be on college campuses. That’s the best way to build your brand,” he said.

Fans like Jason Brown appreciate how close of a connection the fans are able to have with the players. “I think they do a lot for the fans, at an NFL game they just run on the field and run off the field. But at least after the first game, there was a lot more interaction with the fans, he said.

While the AAF is brand new, quality football in Orlando isn’t. A lot of the tailgating fans have been accustomed to an exciting brand of football – especially at Spectrum Stadium. And so far, the Orlando Apollos haven’t let them down.

The team has started the season 3-0. Quarterback Garrett Gilbert leads the AAF with 827 passing yards. Running Back D’Ernest Johnson ranks second in rushing yards, and Wide Receivers Charles Johnson and Jalin Marshall rank in the top five in receiving yards. Not to be outdone by the offense, Orlando linebacker Terence Galvin leads the league with 3 interceptions.

There is also an incentive in the AAF to sign players who played college football in their area, so many fans wear their UCF or Florida gear to come watch their favorite players. It also helps that college coaching legend Steve Spurrier is helming the sidelines at Spectrum.

After the tailgate, the Apollos handily beat the Memphis Express 21-17 in a home stadium that carried 203 more people than their first home game. If the Apollos can keep the winning tradition alive in Orlando, the future of professional football in this town seems bright.