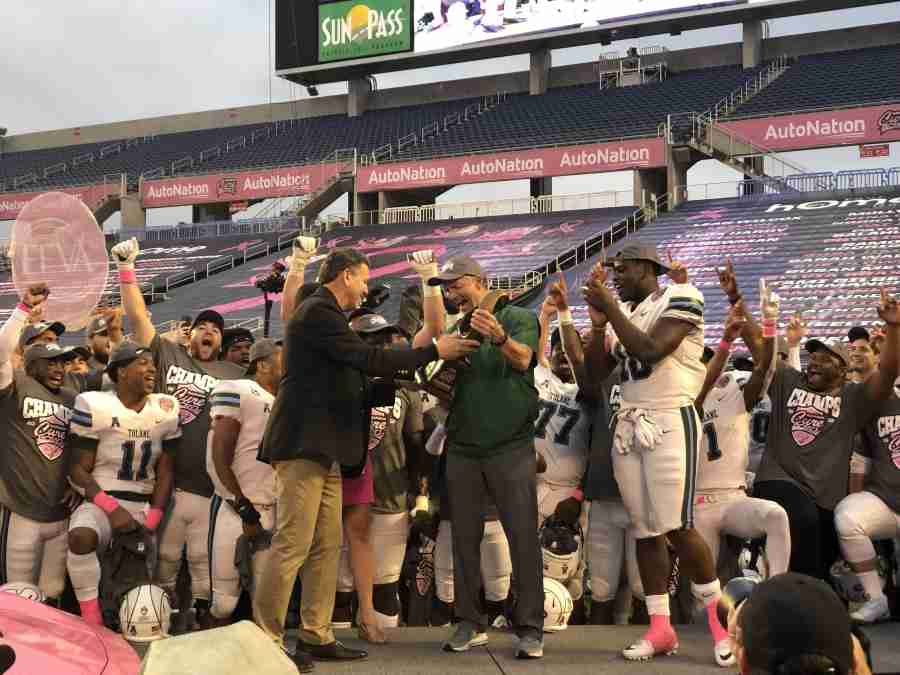 The Tulane Green Wave defeated the Louisiana Ragin’ Cajuns 41-24 in the 2018 AutoZone Cure Bowl, their first bowl victory since the 2002 Hawai’i Bowl – a crucial win for their on-the-rise football program and for the 19 seniors for whom this was their first bowl game.

Tulane’s (7-6) offense started out hot, scoring 21 points in the first quarter. A lot of that had to do with the ability of quarterback Justin McMillian to keep the chains moving both with his arms and with his legs.
When the Green Wave could only get 6 points on the board over the next two quarters, it was their defense who had to step up and make plays. The Tulane defense had no problem getting pressure on the quarterback on third downs and held the Louisiana offense to only one score in each quarter of the game.

In the 4th quarter, the Tulane offense was able to put the game away with two touchdowns, and defense got a crucial interception in the end zone with less than a minute left to clinch their win.

Louisiana was able to score a touchdown on the very first possession of the game, but it was hard-going for their offense after that. They only converted 4 of 13 third downs and held the ball for less than 20 minutes. Their loaded backfield was held to 84 yards all game by the Tulane defense.

While the Cajun defense was able to make key stops in the middle of the game, like a red-zone interception at the end of the first half and a fourth-down stop to begin the second quarter, the offense simply couldn’t execute.

“We started slow and you can’t start slow against a good team,” said Louisiana tight end Matt Barnes in the post-game press conference. “We showed some fight and [the game] could have gone our way we had plenty of opportunities.”

Running back Darius Bradwell was named the game’s MVP, with 35 carries for 150 yards and 2 touchdowns.

“Thirty-five carries is the most I’ve ever received in a game,” said Bradwell. “This whole game and the whole season was for the seniors.”

This is head coach Willie Fritz’s third year at Tulane, and both his first winning season and bowl win with the team. Before he took over the program 15 of the Green Wave past 16 seasons ended in a losing record.

“To start the year off 2-5 and come back and win this game is very special,” said coach Fritz in his post-game press conference. “When you’re in those type of situations it’s natural to doubt yourself, but we did a great job of staying positive.”

In this, head coach Billy Napier’s first year at Louisiana, he had his team competing for a Sun Belt championship.

“What I’ll be looking up at the middle of the night thinking about,” said coach Napier in his post-game press conference. “Is about how we could have gotten our team more ready to play.”

In years to come, this game may be looked back upon as a turning point for both state-of-Louisiana based football programs.

Bryony Deighton contributed to this story.