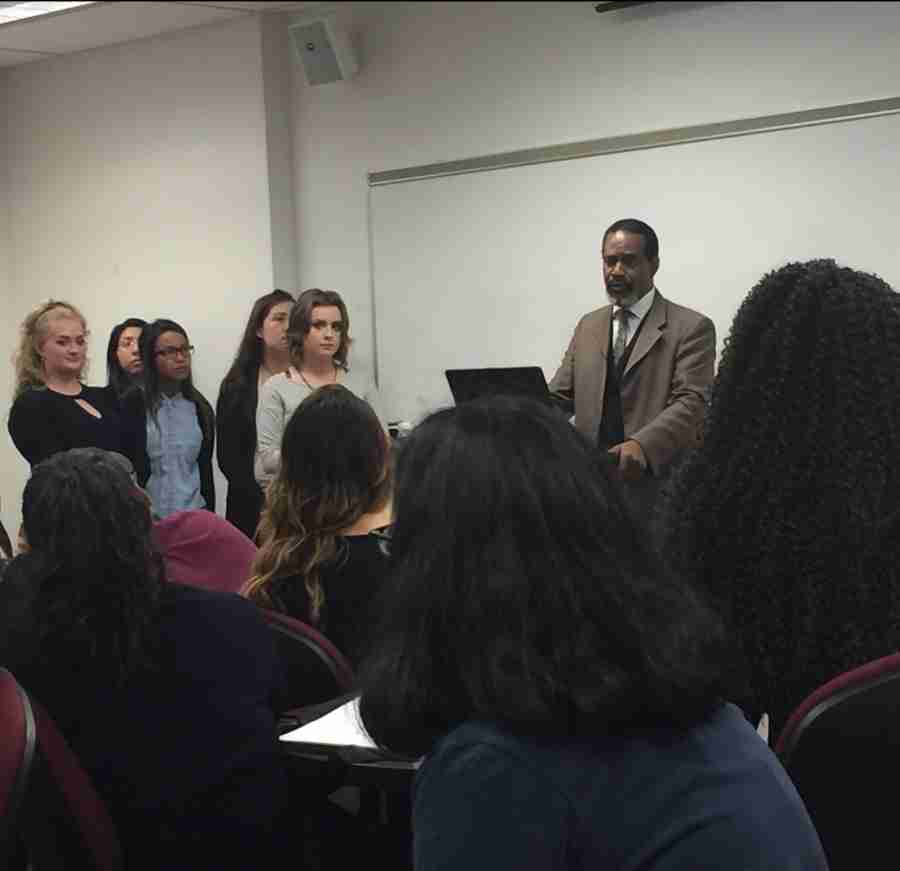 In honor of black history month Valencia hosted lecturer and counselor Imam Hatim Hamidullah for an open forum on Valencia’s East Campus from 11:00 am-1:00 pm Wednesday February 14 in Building 8. Hamidullah shared his story as an African American Muslim in the U.S. He explained of what it was like to be a minority, in a minority.

“African Muslims have been in America since the 1400’s, there’s a community that’s been here that was established. Groundwork for Islam in America had already been laid,” Hamidullah stated.

Hamidullah spoke about his original background growing up Baptist and how he converted to Islam.

“I was a bookworm. So, when I read the entire Bible, I wanted more, and I would have debates at Sunday school. Once I went to college I minored in comparative religion and this is when I came into contact with the Koran and more history of the Bible. I made a decision, even though I saw the golden thread of unity in all the religions. I made a decision to change my name and also my religion to change the history of what America had for my folks,” Hamidullah said.

Professor Dr. Qadri, who set up and hosted the forum, spoke on prejudice.

“I felt as an educator yes we have come a long way. But I also want to bring your attention to the fact that we still have a long way to go. We can still use subtle ways of discriminating people whether it’s in the job place, whether it’s giving that dignity to those who are marginalized,” Dr. Qadri said.

Hamidullah gave his response to recent hate crimes such as Charlottesville, and how this generation should respond to hate.

“Number one change it, number two if you can’t do that speak out against it, and number 3 pray from your heart and pray that it changes,” Hamidullah said.

Hamidullah explained how everyone can unify to extinguish prejudice and preconceived notions.

“Sometimes you can address a problem by going at it indirectly. Just be who you are, just be natural. Don’t look for prejudice in people,” Hamidullah said.

Brianna Trainor, student, shared what she thought of the forum.

“I thought it was very inciteful, I had known little to nothing about this community beforehand and now I feel I have a better understanding of the black community from this discussion,” Trainor said.

Professor Qadri spoke on why she decided to host a forum honoring the African American Muslim community.

“This is a very significant community that have made significant contributions and the more we talk about it the more people will learn and understand the community,” Dr. Qadri said.