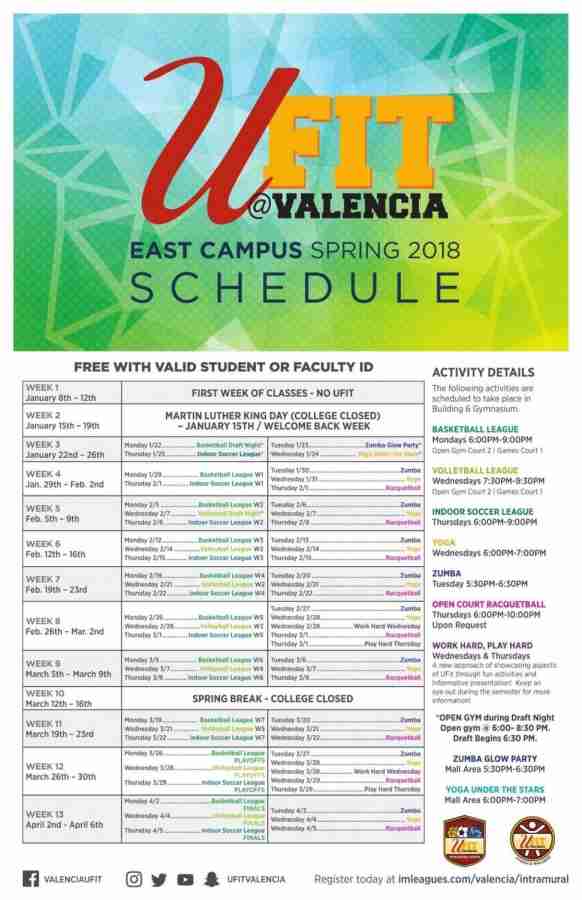 Valencia’s UFit intramural sports and fitness program kicks off its first night of the season with the basketball draft.

Tuesday evening, just under 50 students made their way to the gym in building six to be “drafted” for spring semesters basketball teams. Admission was free with a valid faculty or student ID.

UFit started in 2014 and offers more than just basketball. It also includes indoor soccer, volleyball, and other fitness activities.

“Our motto is get active, stay healthy,” says Brandon Rodriguez, the supervisor of the sports league stated.

The UFit basketball league has eight teams that play each other and can have the maximum of ten players. There are nine-week seasons, seven regular, one week for playoffs, and one week for championships. Each team plays one week a night.

Rodriguez stated that the program is an outlet for students who are stressed from classes and also for those who want to get involved on campus.

Marvin Molina and Ryan Mitchelle Curtis are Valencia East Campus students who joined for different reasons. Molina decided to join for exercise and stress relief, and Curtis likes to compete. Both students did not have any future plans with the sport and were playing just for fun.

The first game of the basketball season begins Monday the 29th at 6 P.M.