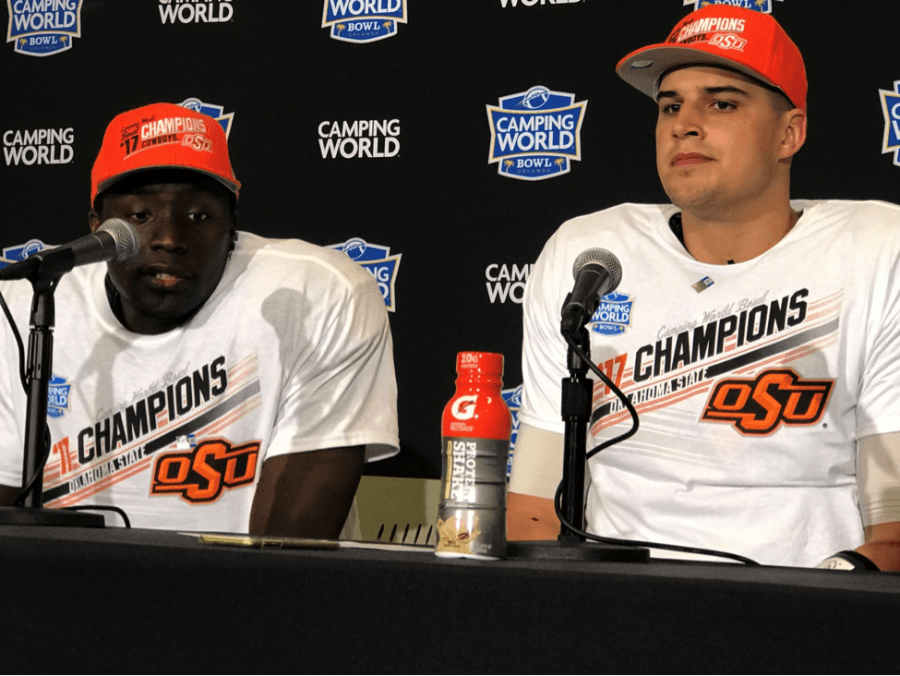 Oklahoma State’s James Washington Jr. (left) and 2017 Camping World Bowl most valuable player Mason Rudolph (right) speak to the media about the next stage of their careers.

Leading up to the Camping World Bowl, Oklahoma State seniors Mason Rudolph and James Washington Jr. were merely a blip on the radar screen of draft gurus and analysts. According to Walter Football, a website devoted to NFL Draft speculation, Washington Jr. was only projected to be a third round draft pick prior to the bowl with no mention of Rudolph.  However after the performance they delivered in their final game as Cowboys, opinions are rapidly changing.  The latest mock from draft-expert Connor Riley of SEC Country predicts the two being first-round selections. Both will enter the upcoming 2018 NFL Draft in April.

This could be thanks to their victory over the Virginia Tech Hokies in the Camping World Bowl, 30-21. The game was held in Orlando’s Camping World Stadium.  Rudolph had 21 completions on 32 attempts, passing for 351 yards, two touchdowns and no interceptions securing the game’s most valuable player award. Washington Jr. had five receptions for 126 yards, and a touchdown.

Despite an already overcrowded class of quarterbacks predicted to be among the first 32 players selected by NFL franchises this spring, Riley believes that Rudolph will be selected by the Jacksonville Jaguars with the 25th overall pick. The year 2017 was a banner year for Mason Rudolph. He led the FBS in passing with 4,904 yards; he also threw 37 touchdowns and only nine interceptions.

Much of Rudolph’s success over the last four seasons has been because of Washington Jr. He was this year’s winner of the Fred Biletnikoff Award for the nation’s best wide receiver. He also gained 1,549 receiving yards and caught 13 touchdowns in 2017 earning a Unanimous All-American and first team All-Big 12 for the second year in a row. He ends his college career as the Cowboys all-time leader in receiving yards with 4,472. Those are statistics that could qualify him for the NCAA’S College Football Hall of Fame.

Oklahoma State Head Coach Mike Gundy told the media about how the program will miss Washington Jr’s presence when he said, “I will be honest, I’m sad that we’re not going to see him running down the middle of field wide open anymore, because, it’s just part of who we’ve become over the last three years and we have to move on, but we all know that when we’ve watched him play, that’s been a special time over the last three seasons for our team.”

When asked how Coach Gundy has helped prepare them for the next phase of their career, Washington Jr. said, “[sic] Just the Cowboy culture, you know? We always talk about four things: focus, effort, toughness and leadership, you know. If there’s one thing that I’ve learned from here is that you’re always going to have to have good days, but out of those bad days you have to make something good happen no matter what it is, life throws a bunch of curveballs, but just hang in there and knock it out of the park.”

A lot can happen between now and April, but no matter what happens in the professional careers, the two intend on maintaining their close friendship. When asked what it meant to connect for their last touchdown together here in Orlando, Washington Jr. said, “It’s huge; it kind of showcased the good that Mason and I have brought to this university.  I wouldn’t ask for another quarterback.  When I look up for the ball it’s on time and without a quarterback as good as him, a lot of that wouldn’t have been possible.”