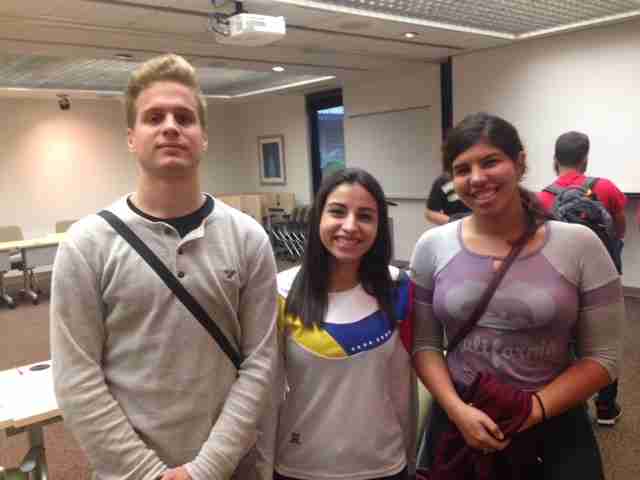 An assembly of impassioned Valencia College students from a wide range of backgrounds came together to discuss a major crisis in South America.

The Model UN hosted The Crisis in Venezuela yesterday. The event, an hour-long forum, included a panel of five Venezuelan students who had experienced the struggles themselves.

The discussion, both a controlled and open debate, focused on three major issues: food rationing, freedom fighting, and politics. The conversation provided insight from both personal experience, the view and impact of neighboring countries, and how the UN should respond.

“It’s a real thing. You see long lines, you see people wait in line from 7 a.m.–7 p.m. for two pieces of bread,” Francisco Goncalves, 24 and a student from Venezuela, said.

“The government manipulates the news, and what is relayed to the people. CNN is blocked, the government blocks any channel talking about the crisis,” added Venezuelan student Luis Monservatt.

An exodus of people from Venezuela have resulted in difficult relations with other nations students noted.

“Colombia, Panama, and Mexico have complained about the massive Venezuela emigration,” Monservatt noted.

Goncalves felt too connected to the crisis to participate in the Model UN debate, but shared some thoughts with the Valencia Voice at the conclusion of the event.

Q: What would you say is the main reason for the crisis in Venezuela?

A: “The main reason for the crisis is major food shortage due to an extremely corrupt government.”

Q: Why do you think the issue isn’t being solved?

A: “It’s a combination of both people who have more power fleeing and those who are still there feeling empowered enough to fight.”

Q: Why do you think the people who do have power are giving up?

A: “Because they feel they can’t do anything, and they don’t want to risk their life for what seems like a hopeless cause.”

Q: With a country so rich in natural resources do you understand how it has become so impoverished?

A: “The government seized and destroyed all of the manufacturing industry. The only blooming natural resource now is oil.”

Q: What do you think it will take to cause a proper transformation?

A: “The food shortage reaching unbearable heights because food is the greatest motivator.”

Q: Do you think the involvement of other countries would help resolve the issues?

A: “It’s a domestic political issue, and it is our job to resolve it.”

While the Model UN event did not provide a solution to the crisis, Maureen Fleitas, another Venezuelan and Valencia student summed up the thoughts of many attending the debate.

“We’re talking about the United Nations. We’re talking about support of other nations not to rescue our nation, but to assert that citizen rights are being met because now there aren’t any human rights. We’re aware it’s a long process, but what Venezuelans needs is hope.”