Defense leads UCF past Tulane, Knights one win away from bowl eligiblity 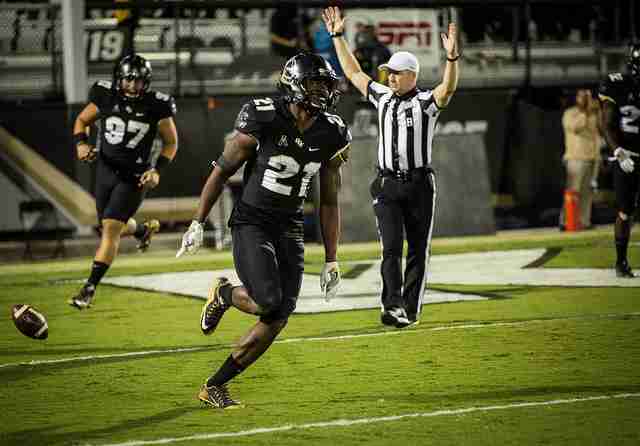 Johnson scored his first touchdown on an option pitch play where he came up with the ball and returned it 30 yards for a score, putting UCF up 13-6. Shaquille Griffin than added to the scoring on the following Tulane drive when he returned an interception 33 yards to the end zone for a touchdown.

“We’re a team, it isn’t just us,” said Johnson about the team’s defensive performance. “Without our d-line pressuring the quarterback, without our linebackers dropping into zone we wouldn’t have scored those points.”

UCF went into halftime with a 7-6 lead but came out in the second half to score 30 unanswered points, including another defensive touchdown by Johnson. Johnson’s second score of the game came on an 86-yard interception return that put UCF up 30-7 early in the fourth quarter.

The Knights opened up the game with back-to-back turnovers on their first two drives, but protected the ball for the remainder of the game as they ended up winning the turnover battle 5-2.

“That’s not how we want to start a football game,” said UCF head coach Scott Frost about the early turnovers. “Particularly when you are playing a team that has a different type of offense than you are used to seeing.”

Milton finished the game 9-20 passing for 85 yards and one interception. The UCF offense rushed for 147 yards, their first 100-yard rushing game since Oct. 1 against ECU.

Tulane’s lone score came on a 14-yard TD run by Dontrell Hilliard 2:37 into the first quarter. UCF’s defense held the Green Wave scoreless following the opening touchdown, while only allowing Tulane to move the ball as close as the UCF 18 for the remainder of the game.

With the win UCF improve to 5-4 for the season an 3-2 in American Athletic Conference play. The Knights need one more win to become bowl eligible following a 2015 season in which they went winless.

“We’re not stopping form here,” said Shaquille Griffin following the game. “Coach Frost continues to tell us we could make this a magical season and that’s our goal, we need one more (win) for a bowl game but we want to win out.”

UCF will return home to take on the Cincinnati Bearcats on Saturday, Nov. 12, with a noon EST kickoff. The game will be televised either on ESPNU or ESPNews.