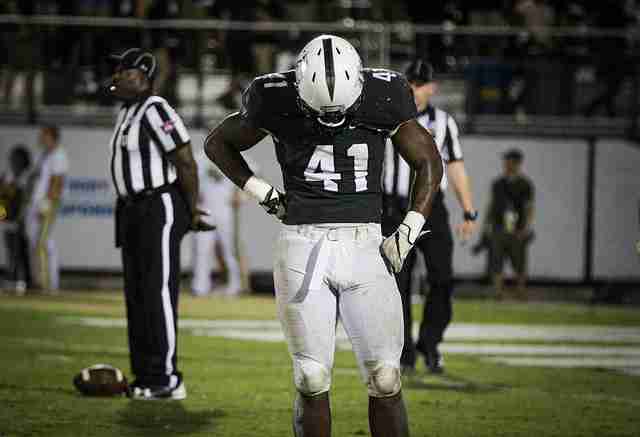 The UCF Knights fell to 3-3 after suffering a last-second loss to Temple on Saturday.

ORLANDO — Phillip Walker hit Keith Kirkwood with an 8-yard touchdown pass with one second remaining on the clock to give Temple a 26-25 conference win over UCF on Saturday at Bright House Networks Stadium.

Walker’s game-winning touchdown pass came after UCF was forced to punt following a three-and-out, giving the Owls the ball on the Temple 30-yard line with 31 second remaining. Walker would go on to complete three straight passes for 70 yards and gave Temple the win with his second passing touchdown of the night.

“I’m sick to my stomach,” said UCF head coach Scott Frost after the loss. “We let one get away, really it’s two of them we let go away and those things can’t happen. We all’ve got to do a better job finishing.”

The Owls scored 18 unanswered points after the Knights took a 25-7 lead from a 63-yard touchdown run from McKenzie Milton. Temple outgained UCF 219-101 in the second half and came up with a big interception when the Knights were driving in Owl’s territory.

“We never really found our rhythm again in the second half,” said coach Frost. “And give credit to them, they kept our offense off the field.”

UCF’s final score of the game came when Milton ran 63-yards to the end zone for a score that put UCF up by 18 with 12:34 remaining in the second quarter, which was the second longest run from scrimmage for a quarterback in UCF history. That would be the last time the Knights would score in the game.

Milton got the start at quarterback after missing the ECU game due to a leg injury. The first-year quarterback finished the game with 210 yards on 13-22 passing and another touchdown on the ground. Walker threw for 167 and two touchdowns for the Owls, including the game-winning score in the final seconds.

The Knights got out to the 25-7 lead by using two touchdown passes from Milton, one to Tre’Quan Smith for 55 yards and another to Adrian Killins.

UCF ran for 86 yards, marking the first time all season the Knights have rushed for under 100 yards. Temple’s running backs totaled for 197 yards, including 137 from Jahad Thomas.

“We just couldn’t finish drives tonight in the second half and late in the second quarter,” said Milton following the game. “But we’ll get better, we’ll learn from it.”

Milton and the Knights offense struggled on third down, going 2-12 while also going 0-2 on fourth down conversions. Temple didn’t fare much better, going 3-14 on third down.

“It’s football, if you don’t convert on third down you’re not going to win games,” said Milton about the third down struggles. “If you catch yourself backed up to 3rd and 12 with a dumb penalty, it’s tough to convert.”

With the loss the Knights fall to 3-3 on the season and 1-1 in the American Athletic Conference.

UCF will now prepare for the first of back-to-back road games. The Knights will face UConn in the second installment of the “Civil Conflict” rivalry on Saturday, Oct. 22 with a noon EST kickoff on ESPNews. The Huskies lead the rivalry 1-0.