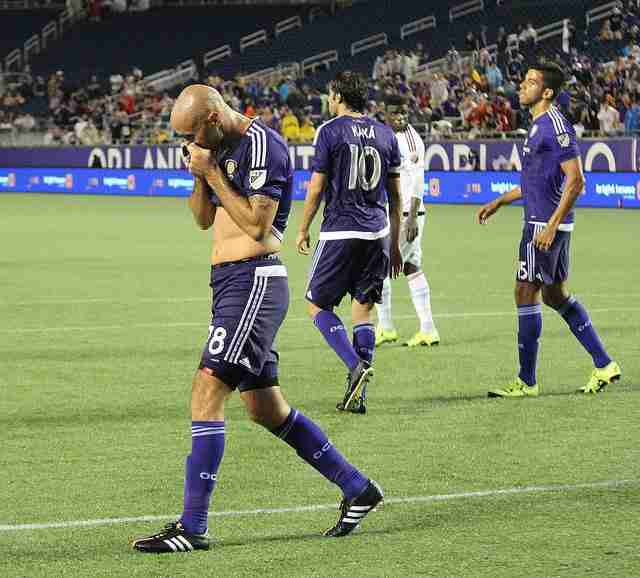 With the draw, Orlando City's winless streak increases to five.

After more than three hours of weather delays due to lightning, Orlando City tied the Chicago Fire 1-1 at their home in the Citrus Bowl to bring their winless streak to five games in a row.

The tie is just another obstacle for a team that has only won one of their past nine games and is still vying for a chance to be the last seed in the playoffs.

Heath then credited the tie to Chicago’s front four and their dynamic play style and the Fire’s ability to succeed on the counter attack.

Despite holding possession for 62.7 percent of the game, Orlando was unable to make the most of it, took 11 shots versus Chicago’s nine shots of the night. Only one shot from Orlando was on target however.

After delaying kickoff for two hours the game finally started, still with rain coming down hard, only for play to be stopped due to lightning in the 18th minute for yet another hour delay.

“It’s not easy for the players when you make them warm up two, three times and then start playing football.” said defender David Mateos about the inclement weather. “This is the life of a player, the weather is uncontrollable, sometimes is bad, sometimes its lightning, but after the weather we went out and played with the heart and the emotion.”

Chicago took the lead with a goal from David Accam that sailed right past goalkeeper Tally Hall in the 30th minute to bring the Fire ahead 1-0 early on.

Orlando City seemed to have tied the game with a header from Cyle Larin, but the goal was declared an own-goal from Chicago’s Eric Gehrig by the officials tying it up at 1-1.

“Lewis crossed it in and I flicked it and the other guy [Eric Gehrig] got a touch on it before it went in,” said Larin, who was unaware it was ruled an own goal by officials. “Hopefully I get credit for it, I worked to get in that position, and hopefully I can get that goal because that would be my shot that would break the record.”

The rain cleared up by the end of halftime, but the weather clearing didn’t prove to make a difference for either team who failed to score in the second half.

The tie is Orlando’s eighth this year and brings the team to a 7-12-8 record and sets them at sixth in the Eastern conference. The Lions must place at least sixth in the standings to advance to the playoffs.

“It was a missed opportunity [to get closer to the playoffs] but I would have felt worse if we hadn’t gone about trying to win the game, and I think we did, the lads gave it everything they could.” said Heath about the performance of his squad. “All we were lacking was a quality finish. We moved the ball really well, we had some good opportunities. It was one of those games where you didn’t feel comfortable till the ninetieth minute.”

Orlando City will now go back on the road to face the 10-9-7 New England Revolution at Gillette Stadium in Massachusetts next Saturday, Sep. 5, and will then return home to face Sporting KC on Sep. 13.