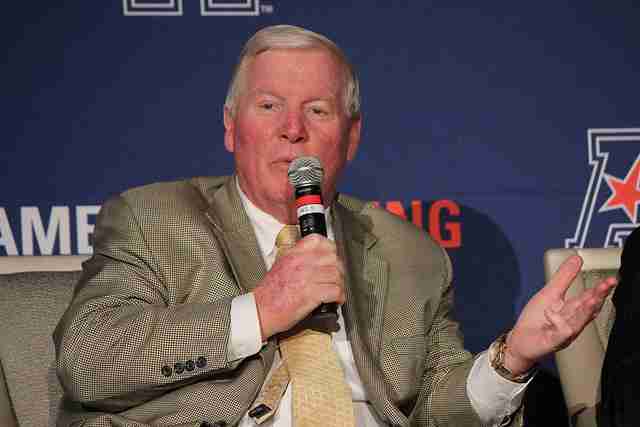 UCF head coach George O'Leary says that the goal for his Knights in 2015 is another conference championship.

NEWPORT, R.I. — The UCF Knights football program is the winningest team in the still young American Athletic Conference but the media selected UCF to finish fourth in the conference despite being back-to-back champions.

The Knights graduated a lot of seniors from last year’s team including the entire starting wide receiving corp and most of the secondary (Jacoby Glenn left early for the NFL) so head coach George O’Leary felt that the media was generous picking UCF to finish second in the division.

“We’re going to be there at the end, you can book that one.”

UCF will have starting quarterback Justin Holman back in 2015 as well as running back William Stanback, both of which are expected to contribute heavily in the offense. Holman is entering his second year as the starter and has spent all summer working with his receivers to work on the touch of his passes and build chemistry with the new first-team group that includes Jordan Akins.

“All spring, all summer, we really haven’t taken (any) days off,” said Akins of the work Holman has put in during the offseason.  “We’ve just been going at it, working, working, working to get that connection on and off the field.”

Akins will be the leader in the receiving corps as the 23-year-old is one of two players returning that had a catch last season for the receiving unit, with Taylor Oldham and his three receptions being the other.

UCF only returns 40 receptions from last year as they lose four players who has over 30 receptions a year ago, including Breshad Perriman and Rannell Hall, who both had more receptions than all the returning pass-catchers combined.

While the Knights have a lot of turnover on defense they are returning most of their defensive line including Thomas Niles who led the team in sacks last season with 7.5.

Pass rushing will be one of UCF’s strengths in 2015 as three of four of the starters from a year ago return and with them bring 13 sacks and 27 tackles for loss from last season.

The pressure that the defensive line can put on opposing quarterbacks will help the young secondary as players get acclimated to the defense.

“We’re probably the best we’ve been up front defensive line wise two-deep,” said O’Leary about his inexperienced secondary. “That’s what helps your secondary, getting pressure on the quarterback and don’t give him a lot of time to look and see what’s going on. I think we’re going to be fine there.

Stanback will be another key part of the offense in 2015 as the junior looks to carry the momentum from last season into 2015. Stanback finished last season with 679 rushing yards and 10 touchdowns on 189 carries in a season where he missed three games due to injury.

UCF’s out of conference schedule will also be something to keep an eye on at the start of the season as the Knights will travel to Stanford and South Carolina for games against Power 5 schools. Wins in either or both of those games for UCF and they could jump back into the national spotlight before they start conference play against Tulane in October.

The Knights open up the season against Florida International University on Thursday, Sept. 3 at Bright House Network Stadium.