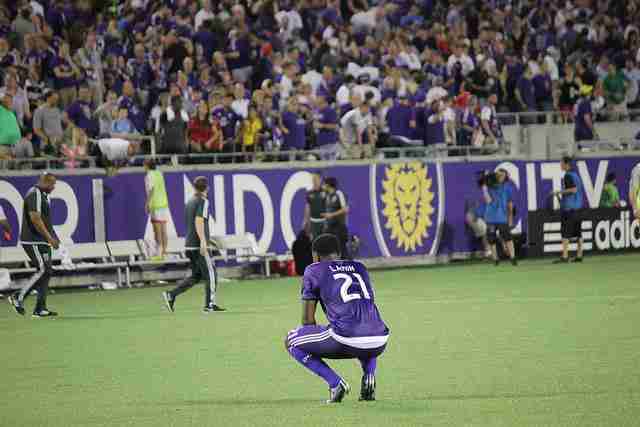 Cyle Larin received the first red card of his career in the 33rd minute for a challenge on Sacha Klejstan.

In a game where Cyle Larin and Adrian Heath were both sent off, Orlando City SC was defeated by the New York Red Bulls 2-0 at the Citrus Bowl on Saturday, July 19.

The opening goal was from USA international Sasha Kljestan. He was given space in the box and was able to capitalize on it. The scoreline stayed the same until the 90th minute of the match, although both teams were fighting very hard to change that. This though was not the story of the match.

Another Orlando red card was seen in this match for Canadian rookie Cyle Larin. After going into a tackle against New York midfielder Sasha Kljestan the assistant referee had a small talk with the head referee. After a quick word the head referee pulled out an unexpected red card. The replay of the incident revealed little to no justification for the ejection. Larin recently returned from international duty for Canada in the Gold Cup.

“I went for the tackle and I don’t think I touched him. I looked at the ref and he called the foul. He asked the fourth official and made the call.” said Larin of the red card. “I think he made the wrong decision and it happens. I was shocked to get the red card and walked off the field. I couldn’t do anything about it. I went for the ball. The ball was there but I didn’t get him or the ball and got a red for it.”

After being put down a man for the sixth time this season Orlando still kept the pressure on Luis Robles the New York Red Bull goalkeeper. Robles had a very busy night having to fight off multiple on target shots that came his way. With just 10 men Orlando was still able to have multiple chances and shots on goals to make the night very difficult for New York’s keeper.

This game marked the return of Cyle Larin and Darwin Ceren from international duty. Also Corey Ashe the recently acquired left back started his first game in purple for the Orlando City Lions.

With the game entering the dying minutes Orlando kept fighting but New York were able to pt the  nail in the coffin with a 90th minute goal.

Cristian Higuita was given a caution which means he will miss the next game due to yellow card accumulation.

Cyle Larin mentioned in the locker room question session that this red was his first in his history of playing soccer.

“If you say anything you get fined if you don’t say anything nothing changes.” said coach Heath about the catch-22 about speaking out against referee mistakes.

Coach spoke that he was very proud of how his players fought and kept trying to get the equalizer. But the refereeing errors tarnished the mood of the coach and the players in the locker room

The attendance of 33,518 was the third highest of the season for Orlando City.

“These two last games were difficult for us, and now we have to think about this week and prepare for Chicago, and then going to New York.” said Kaka about the next stretch of games. “It’s going to be a tough game, but this is them where we can show everyone that we can arrive in the playoffs”