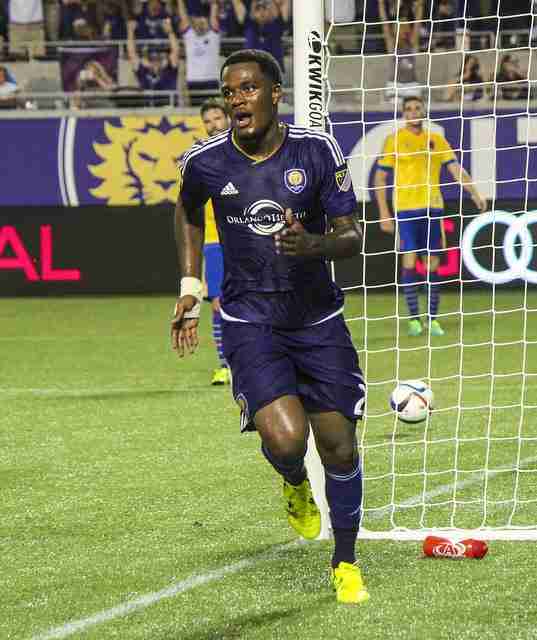 Cyle Larin has scored six goals so far during his rookie campaign with Orlando City.

Those who follow Major League Soccer are more than familiar with the name Cyle Larin. Despite only being a rookie in the league, Larin has left no doubt in anyone’s mind that he’s a special talent with a promising future. In addition to succeeding on the pitch in Orlando, he has also been selected to the Canadian National Team and is expected to be a major factor in the Gold Cup, which started this week and runs through July 26.

For soccer players around the world, there’s no greater honor than to play for your national team – at least that’s the way Larin feels after being named to the Canadian National Team’s 23-man roster for this year’s CONCACAF Gold Cup. With Canada looking for its first Gold Cup since 2000, Larin is expected to have a major impact on their success. Larin got the start for Canada in their first match against El Salvador on July 8, a game that ended in a scoreless draw.

Regardless of whether he starts, though, one thing is for sure: the Ontario native will have an impact. As Daniel Squizzato writes for MLSsoccer.com, “He will be the focal point of the Canadian attack.”

Larin has already scored three international goals for Canada, two coming in qualification games for the 2018 FIFA World Cup. After Canadian great Dwayne De Rosario’s recent retirement, Larin feels some pressure and honor to carry the team in the coming years. “It just motivates me to do good things for Canada: take them far and try to make it to the World Cup,” he recently told reporters. “It just pushes me to do what De Ro did in his career; hopefully, I can do more.”

While Larin has long had a good reputation among Canada’s soccer elite, it’s his early success with Orlando City that’s giving him a chance to make a difference so early in his career.

In 13 games this season, 10 of which have been starts, Larin has scored six goals on 29 chances. In week 11, he was voted to the MLS Team of the Week for his incredible performance against the LA Galaxy. This win over the defending MLS champions was their first at home. The league attributed his award to the fact that Larin has a strong ability to hold possession and strategically finish goals.

“[He’s] very good and has had the important goals and is helping up top.” said teammate and soccer legend Ricardo Kaka after a recent win against the Colorado Rapids. “We are happy to have a strong rookie like him.”

Success No Surprise for Those Who Know Larin

While professional soccer fans south of the Canadian border and north of Orlando may not know much about Larin, those who’ve been alongside him through his upbringing aren’t  necessarily surprised by the success he’s had in his young career.

Just ask Bobby Smyrniotis, Technical Director for Sigma FC, the private soccer academy Larin was a part of in his home country of Canada. “Cyle has been here since he was 11 years old and it is great to see his growth and maturity as a player from a boy who scored many breakaways at 10 years of age, to a complete and modern striker able to play with both feet, finish from all areas, dominate his region of the park and provide for his teammates.”

When discussing his decision to sign with the University of Connecticut to play college soccer, Smyrniotis called Larin “the most complete striker” he’d ever worked with. His college coaches would quickly agree.

As a freshman at UConn, Larin started all but one of the team’s 23 games – logging a whopping 1,721 minutes of action. After scoring 14 goals, he was named the AAC Rookie of the Year (among many other national honors). In fact, after only one season, he was already touted as one of the top players in the 2014 MLS SuperDraft. However, he opted to return to UConn for another season.

During the offseason, Larin rejoined Sigma FC and scored four goals for his team during their first season in the inaugural League1 Ontario. He then followed up his impressive 2013 campaign at UConn by scoring nine goals in 16 games and was named the AAC Offensive Player of the Year. When the 2015 MLS SuperDraft rolled around, Larin opted to join the league, instead of signing with an international club. He was selected by Orlando City SC with the number one overall pick.

It will be incredibly interesting to see what the future holds for Cyle Larin. However, while the details and specifics may not be clear, those who know him best know success is imminent. In an age where most of the world’s top talents migrate to European soccer clubs, it’s refreshing to see a young talent stay in the Americas and give so much back to his home country.