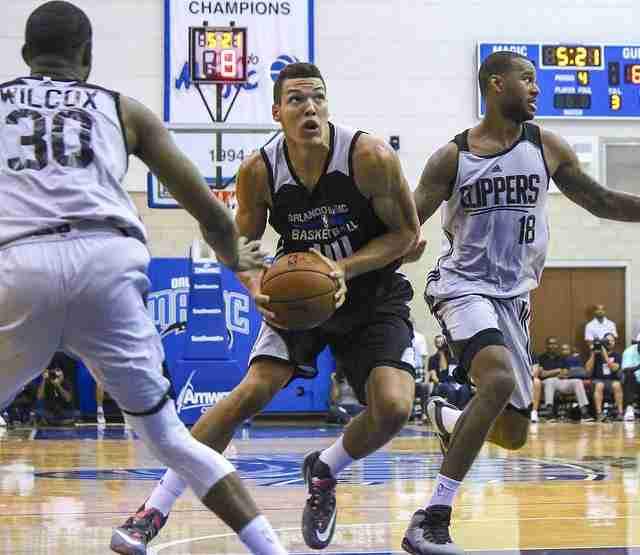 Aaron Gordon has averaged 22 points and 10.7 rebounds per game for the Magic through three summer league games.

Aaron Gordon is still only 19 years old but the young forward already has a year of professional basketball under his belt and the best part is he’s still growing into his body.

“This kid is only 19 and his roof is so high,” said Magic assistant coach Mario Elie about Gordon during the summer league. “His competitive spirit, his work ethic, his energy in the huddle is fantastic the leadership he shows for a 19-year-old kid, people better watch out in this league he’s a phenomenal talent.”

Gordon has started the Orlando Pro Summer League with three consecutive 20-point games and recorded a double-double in two of the Magic blue team’s three games so far. He’s scored 22 points in all three of the Magic’s games through Tuesday afternoon and has totaled 32 rebounds.

For the 19-year-old there is a lot to still learn about the game but it doesn’t hurt to have a teammate that you’ve played with for three years by your side during the growing pains. Gordon not only played alongside Elfrid Payton during their rookie seasons, but the two have played together in the past during their stint with the USA under-19 team.

“This is really like the third year that I’ve been playing with Elfrid so we have a little bit of chemistry coming in and now he’s always looking for me,” said Gordon of his teammate. “And just like me improving on finding my spots when to go for alley-oops, he’s improving on where to put the ball for me to dunk it.”

As a rookie Gordon averaged 5.2 points and 3.6 rebounds per game while playing between small forward and power forward. This season Gordon is expected to still play both positions but won’t be as undersized at the 4, while continuing to be athletic enough to play the 3.

Despite being a forward Gordon’s three-point game has improved during the offseason, which is noticeable by the small sample size of 6-12 from behind the arc during the summer league. During the 2014-2015 season Gordon went 13-48 from three-point range.

“A lot, everyday,” said Gordon of how much he’s worked on his three-point game during the offseason. “I just want to be a complete basketball player at the highest level to the highest point of my potential and I need that in my game not only to spread the defense but to say that I’m a complete player.”

With Tobias Harris coming back to Orlando, Gordon will be looked to play more power forward than small, but his mobility along with his improved three-point game will make him a valuable option for the Magic at both positions.

While it appears that Gordon has added some muscle during his first NBA offseason, the 6-foot-9 forward out of Arizona credits most of it to simply growing as a 19-year-old.

“I think I’m just getting older,” said Gordon jokingly about the muscle he’s gained during the offseason. “I’ve worked out at P3 out in Santa Barbara, and they helped out a lot, it was more so mobility and injury prevention but I’m 19 so hopefully I can put on a little more weight.”

The Magic may only be two games into their summer league but fans in Orlando may have a reason to be excited again as this year’s team will feature a nucleus of players that average just 21.5 years of age (Oladipo, Payton, Harris, Vucevic, Gordon and Hezonja).

Orlando still have three summer league games remaining to see how much Gordon has improved, but if the past two games are any indication the Magic could truly see what their 4th overall pick from last year’s draft is capable of.

“I feel a lot more comfortable, I feel like I pretty much control what I want to do on offense,” said Gordon about how he’s improved from year one to two. “I know I have a lot of improvement to go but it’s one day at a time and I just have to stay focused.”