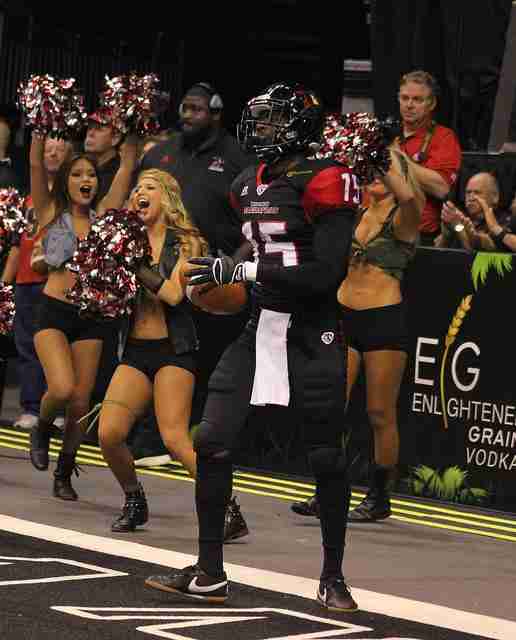 Kendal Thompkins leads the receiving corp with 59 receptions for 765 yards and 12 touchdowns.

The Orlando Predators take on the Portland Thunder on Saturday at the Amway Center in downtown Orlando.

This will mark the first meeting between the two franchises since the 2013 inauguration of the Thunder into the AFL.

Kickoff is at 7:10 p.m. – Beat reporter Bryce Brimhall will be providing live updates throughout the game.

FINAL – The Orlando Predators defeat the Portland Thunder 69-43 to improve to 5-4 for the season.

5:56 – Wide receiver Jared Perry takes the option from Kyle Rowley and passes it to Duane Brooks for a Portland touchdown. PAT is no good, Orlando still leads 62-37.

9:39 – The ruling on the field stands, Orlando is granted the touchdown. Predators lead 62-31.

9:48 – Bernard Morris scored on a QB sneak but the play is followed by a scuffle on the field resulting in canceling penalties. Portland challenges the play, it is now under review.

12:21 – Jared Perry makes the reception in the endzone for a Thunder touchdown. Orlando has challenged the play and it is now under review.

END OF 3RD – The Orlando Predators lead the Portland Thunder 55-25. This is the largest lead the Predators have held all season.

13:17 – Morris connects on a 33-yard pass to Brandon Thompkins to score for Orlando touchdown. PAT is missed, Predators lead 48-25.

0:10 – Morris throws a 28-yard bomb to Julian Williams for his first catch and touchdown of the season. Lewis makes the PAT, Orlando leads 42-25.

0:38 – Mark Lewis attempts another onside kick but it is recovered by the Thunder on Orlando’s 10-yard line.

0:40 – Brandon Thompkins stretches to make a catch in the endzone. PAT is good, Predators lead 35-19.

1:02 – Morris keeps it and runs into the endzone for an Orlando touchdown. PAT is good from kicker Mark Lewis. Predators lead the Thunder 28-19.

4:40 – Predators force an incomplete pass on fourth down to cause a turnover-on-downs. Orlando has the ball on their own 16-yard line.

6:16 – Darron Thomas is escorted off the field while gripping his knee after getting slammed into the wall on a quarterback keeper. Kyle Rowley is now in for Portland.

7:51 – Turnover-on-downs gives Portland the ball on their own 22-yard line.

10:40 – Portland tight end Jeraill McCuller makes a one armed catch in the endzone from Darron Thomas to bring Portland within two, Orlando leads 21-19.

END OF 1ST – The Orlando Predators lead the Portland Thunder 21-12. Portland has the ball on the Predators 16-yard line to start the quarter. The Predator defense is really putting a damper on the Portland offense, shaking up Darron Thomas forcing botched plays and missed opportunities.

2:26 – Bernard Morris attempts his first pass of the game and connects with B. Thompkins to bring Orlando to Portland’s 23-yard line. Morris then threw a short pass to Thompkins who ran it in 22 yards for a Predator touchdown. Orlando leads 21-12.

5:38 – Portland touchdown as Thomas makes an easy pass to the wide open V’Keon Lacey for a score after a six-play drive. PAT was no good. Orlando leads 14-12.

10:05 – Predator defensive lineman Jeremy Geathers recovers a forced fumble and brings it back to the endzone on Portland’s first play of the drive. Orlando leads 14-6.

11:25 – Brandon Thompkins makes it look easy and remained untouched while returning the kick for a touchdown. Orlando now leads 7-6.

11:38 – Thomas connects with Duane Thomas in the endzone for a Thunder touchdown. A bad snap forces a failed extra point attempt with Darron tossing it into the stands under pressure. Portland leads 6-0.

15:00 – Orlando has won the coin toss and has chosen to defer to the second half.

Pregame notes: Bernard Morris is set to start under center for the Predators. Greg Carr is still our for Orlando, he is expected to return next week.