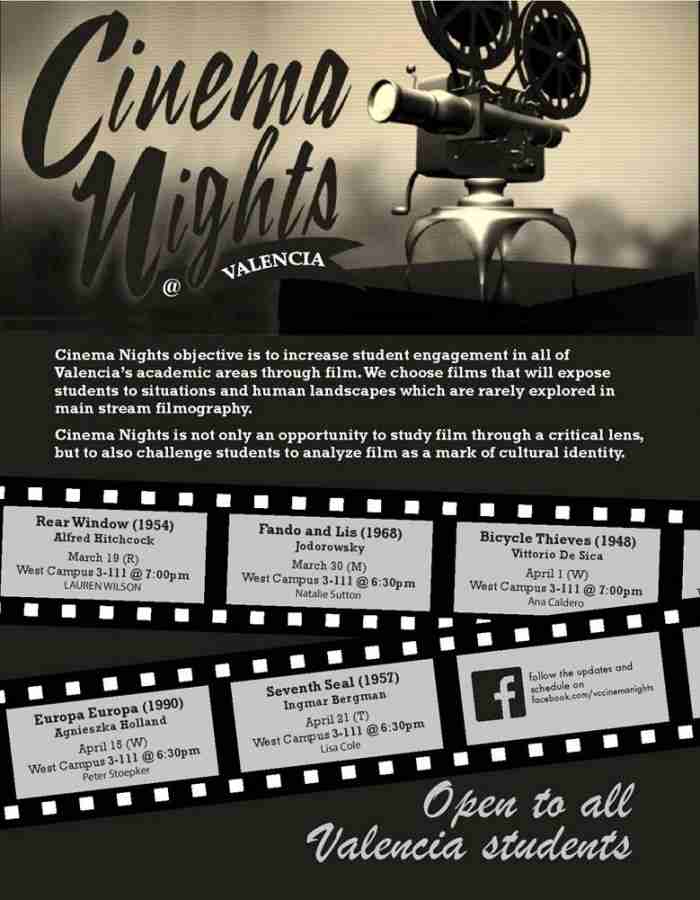 There are only two scheduled Cinema Nights left in the 2015 Spring semester.

Here’s something on Campus you may not be aware of: Cinema Nights.

A small event that has only been happening since the previous semester, Cinema Nights is slightly different than one would expect. It is, of course, a night for the showing of a movie, but the movies shown aren’t the newest blockbuster or old favorites. Instead, the movies shown are films that the guests probably haven’t been made aware of, such as the movie Fando y Lis, shown by Natalie Sutton, one of the leaders of the events along with professor Robert Warren.

“We wanted to make more of a community,” said the pre-mentioned professor Warren about Cinema Nights. “Students come, take their classes, and leave.”

And that they do. Sadly, Valencia isn’t known for our enormous events and student-body-wide attendance records. Due to being seen as a small college and a stepping stone in a move towards larger universities, events such as Cinema Nights haven’t garnered the attendance that is needed to keep them going.

The next opportunity to attend Cinema Nights is Wednesday, April 15, when professor Peter Stoepker will be showing ‘Europe, Europe’ in Building 3, Room 111 at 6:30 p.m. There’s always something interesting being shown, and the chances are heavy the film will be something you wouldn’t have been given the chance to see elsewhere.