Orlando City give up another stoppage time goal, fall to D.C. 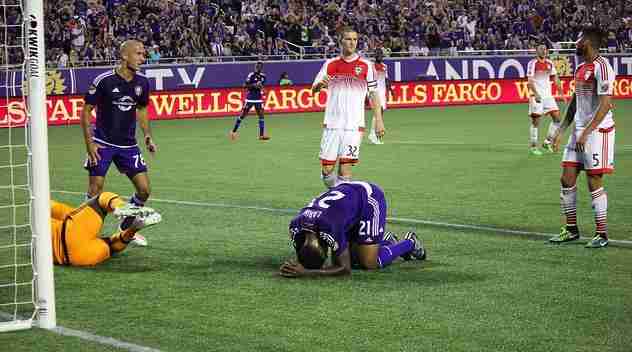 Orlando City gave up a game-winning goal in stoppage time for the second-straight home game.

ORLANDO — It was Deja Vu for Orlando City SC as the Lions again gave up a stoppage time goal off a set piece, this time at the hands of D.C. United for a 1-0 loss in front of an announced attendance of 32,832 at the Citrus Bowl on Friday.

Orlando City managed to get off 17 shots throughout the game, but only managed to land five of those on net.

“What I can take out of the game is only positive things,” said Aurelien Collin after the game. “We had a lot of opportunities, we played very good football. It’s one game and I’m very confident for the next one.

“It’s just one game, the season is very long and we showed tonight that we were better than them.”

Goalkeeper Bill Hamid kept D.C. in the game as he made five saves including a few crucial stops on breakaways.

The Lions continued to put the pressure on United during the second half, but in stoppage time Luis Silva found the back of the net to put Orlando City down 1-0, and give the Lions their second straight home loss in stoppage time. It was Silva’s first goal of the season as well as his first appearance of 2015 for D.C. United.

Rookie Cyle Larin got some extended playing time in the loss, as he was substituted into the game in the 21st minute after Pedro Ribeiro went down with a lower body injury. Larin finished the game with four shots, two of which were on goal.

With the the Lions record falls to 1-2-2 with five points for the season. Orlando has gone 0-2-1 at home so far this season and have scored one goal in those three games.

Despite the recent stretch of one win in three games the Lions aren’t putting their heads down just yet, as the team and coaching staff took away many positives from the 1-0 loss.

“After the game I said ‘let’s not lose faith, we’ll be okay, we played very well,’ it’s just about faith,” said Collin about what he told the young players after the game. “We were better than them, much better than them tonight. They won, congratulations to them but in the long run I’d rather be here in Orlando than over there.”

Orlando City will have over a week to bounce back as they won’t return to the pitch until Sunday, April 12 when they travel to Portland, Oregon to take on the Timbers.

“I’m sure once we watch the tape back we’ll be delighted with the things we’ve been working on over the last few weeks,” said Orlando City manager Adrian Heath following the loss. “The important thing is for us as a group to try and maintain the confidence of the team.

“We have to maintain the fact that we’ve played a lot of good football today and we can actually take away positives from that and we have to because that’s the only thing in this moment that we can take from it.”