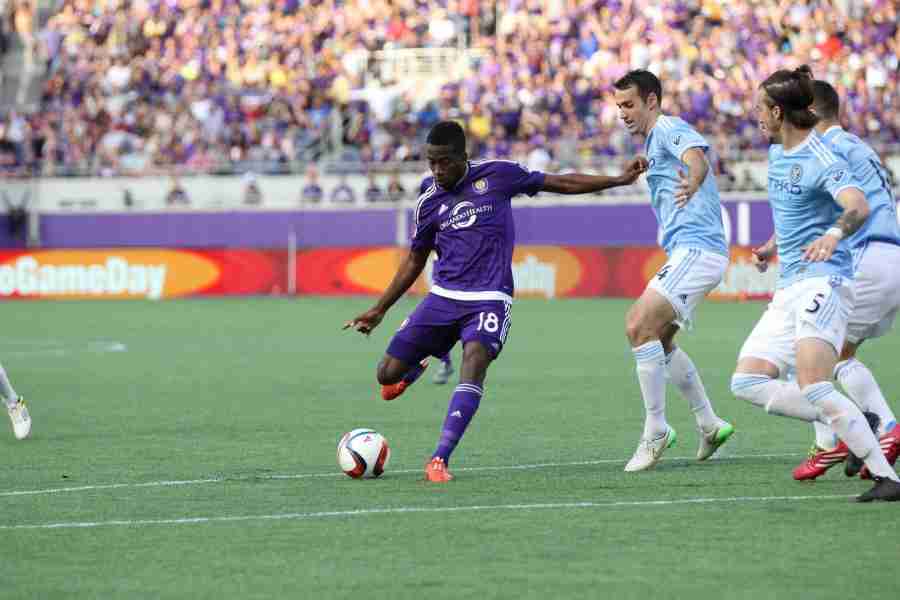 Kevin Molino and Orlando City SC will look for their first home win of the season on Friday against D.C. United.

Orlando City SC is looking for their first home win of the season as they take on D.C. United on Friday at 7 p.m.

The Lions will have Brek Shea, Kevin Molino and Darwin Ceren returning to the lineup after missing the club’s last game due to international duty. Orlando City beat writer Danny Morales will be updating this live blog throughout the game.

90′ The referee adds three minutes of stoppage time as Orlando City and D.C. are still scoreless.

81′ Rivas gets a good look on goal, but his shot goes well wide of the net.

79′ Orlando City gets a corner after Rivas takes a shot on target from outside the box. Orlando can’t capitalize.

75′ Orlando City are getting crosses into the box, but can’t find anyone on the other end.

70′ Carlos Rivas gets substituted into the game for Eric Avila.

69′ Orlando City gets a corner kick and nearly put the ball on net, but it goes out for a goal kick.

68′ Orlando City puts together a string of saves that includes a stop by Ricketts and a save on the line by Shea.

65′ Ceren gets a yellow card for a hard tackle near midfield.

60′ Orlando City gets a free kick after Davy Arnaud gets a yellow card for a tackle on Larin.

59′ Still scoreless going into the 60th minute. D.C. United are putting together better passes on offense early in the second half, but still no goals.

46′ The second half is underway at the Citrus Bowl. D.C. makes a substitution, Michael Farfan comes in for Nick DeLeon

(H/T) 45′ Orlando City and D.C. are scoreless after the opening 45 minutes. Orlando is outshooting D.C. 8-4, while also holding 53.7 percent of possession.

40′ Orlando City is maintaining 56 percent of possession and have outshot D.C 5-2 with five minutes left in the first half.

33′ Hamid makes a save on a shot by Ramos from close range. Lions attacking well early on.

31′ Molino gets a look at goal, but his shot goes off the crossbar and out for a goal kick.

30′ Orlando City gets a free kick on the left side, but D.C. sends it out with a header.

27′ Kevin Molino gets a yellow card for a handball on a D.C. United free kick.

24′ Larin takes his first shot on goal and it’s blocked over the crossbar by Bill Hamid.

21′ Rookie Cyle Larin comes in as a substitute for the injured Ribeiro.

19′ Ribeiro goes down holding his hamstring after a run near the box.

18′ The Lions will take their second corner of the game after Ribeiro’s shot gets deflected out of bounds, Orlando City nearly score on the corner, but the ball goes just wide.

14′ Orlando City is slightly leading in the possession category, but the Lions are applying pressure on offense.

6′ Orlando City gets a corner kick, their first of the game, but nothing comes from it.

0′ – We are underway from the Citrus Bowl. Pedro Ribeiro is starting up front for Orlando City, while coach Heath will go with five midfielders.