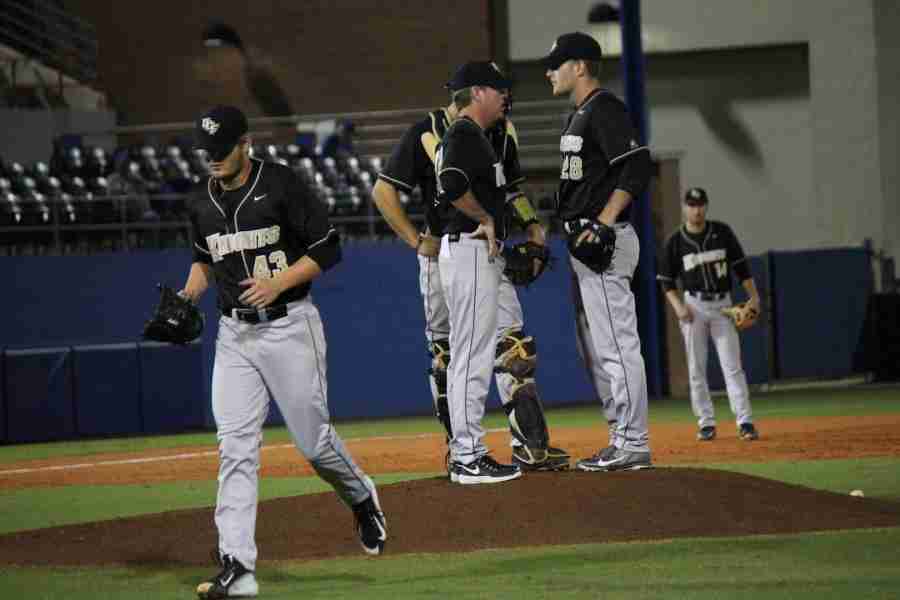 UCF used six different pitchers on Wednesday against the Gators.

GAINESVILLE, Fla. — The No. 2 Florida Gators avenged a one-run loss the night before and defeated the No. 9 UCF Knights 10-2 at McKethan Stadium in Gainesville in the second game of a home-and-home series on Wednesday.

Florida started the game by scoring at least one run in each of the first four innings to put them ahead 7-1 over UCF going into the fifth inning. In those four innings, the Gators plated two runs via wild pitches and another after a Jordan Savinon throw to second base that ended up in center field.

“Unfortunately today we didn’t play our best game,” said UCF head coach Terry Rooney after the game. “Credit the University of Florida they played very well. They had tremendous at bats, all their pitchers threw well and they beat us.”

UCF’s Dylan Moore hit a leadoff home run in the fourth inning to put the Knights on the scoreboard, but that was all the offense the Black & Gold would get until the eighth inning.

Florida added another three runs on three hits and two UCF errors in the bottom of the sixth inning to extend their lead to 10-1. The Knights made four total errors for the game and the pitching staff threw a combined four wild pitches.

“We just didn’t play well, we just didn’t play the fundamentals of the game today,” said Rooney. “Wild pitches and walks — it’s one thing we’ve been talking about just collectively as a team and as a pitching staff meaning that we just need to get better with the strike zone.”

UCF’s offense combined for five hits throughout the game with Eugene Vasquez and Moore’s solo home runs as the only scoring the Knights would produce all night.

With the loss, UCF’s record falls to 11-2 for the season and 25-15 all-time against Florida. The Gators split the home-and-home series after suffering a one-run loss on Tuesday in Orlando.

The Knights’ next game will be against Columbia on Friday in the first of a three game series at Jay Bergman Field with the first pitch scheduled for 6:30 p.m.

“We just have to flush it and just move on to Columbia on Friday and win us a ballgame,” said Eugene Vasquez on bouncing back from the loss.