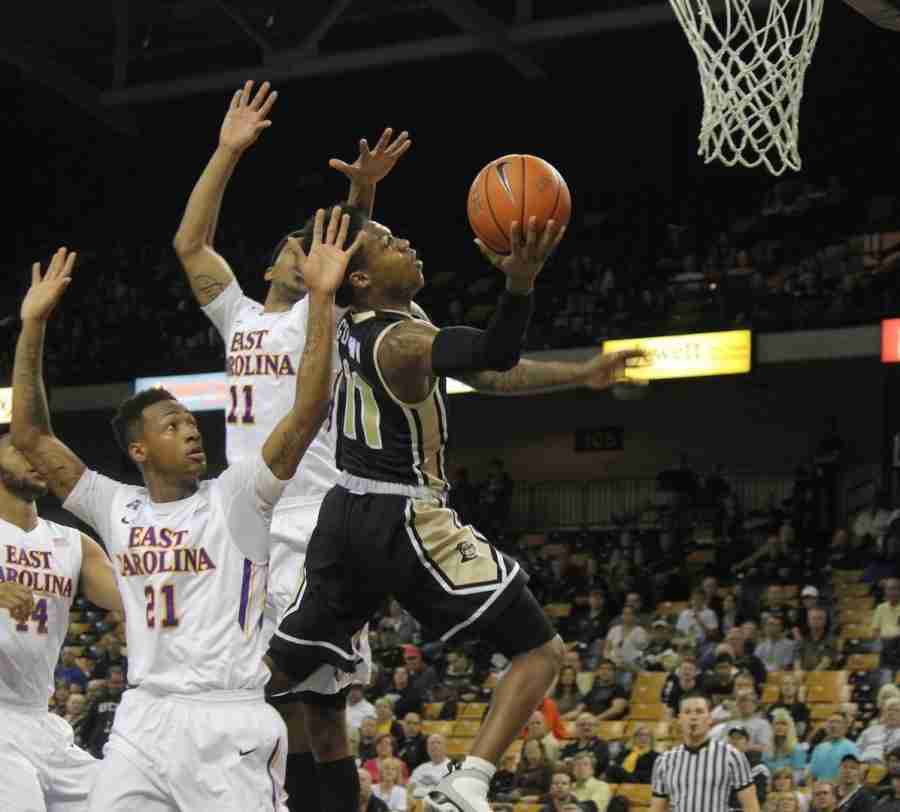 Brandon Goodwin scored nine points and had eight assists in the loss against ECU.

ORLANDO — Kasey Wilson scored seven points in his final game at the CFE Arena as the UCF Knights fell to the ECU Pirates 71-66 on Senior Day on Saturday afternoon.

Wilson is the lone scholarship senior on the UCF roster and got the start along with walk-on senior Myles Davis. Davis would record a steal during his two minute of play while Wilson went on to finish the game with seven points and five rebounds in 26 minutes of play in his final home game as a Knight.

“It’s wild because this is all that I’ve done the last four years,” Wilson said after his final home game. “In high school you think about well I’m going to continue to play because I’m going to college and then after college it’s like the real world because if you don’t continue to play basketball you got to get a job and got to grow up fast and it’s crazy. In a few months I’ll be graduating from the place that I’ve called home for the past four years.

“It’ll all sink in but right now I’m just trying to focus on just being with these guys the time that I have left and having fun with them.”

UCF led for the entire opening half and took a 31-25 lead into the locker room at halftime. The Knights shot 46.2 percent from behind the three-point line while holding the Pirates to 16.7 percent (1-6).

ECU opened the second half with an 11-4 run to take their first lead of the game with 16:48 remaining in regulation. The Pirates came out in the second half shooting 60 percent from the behind the three-point arc, including Caleb White’s two triples.

The Knights and the Pirates would exchange runs throughout the second half, but ECU took a 66-64 lead when Terry Whisnant hit a three with 1:04 remaining in the game. UCF would manage to score only two more points during the final minute of the game.

“They made a run and that was fine but we got back up again,” said UCF head coach Donnie Jones. “We just had some vital possessions. Anytime in conference play it’s going to come down to certain possessions. We had a key turnover there late and they come down and hit a big three and go up two. We were still fine and then we come down and don’t score and execute.”

Brandon Goodwin had an opportunity to tie the game at 66-66 with nine seconds left in the game, but his floater went off the rim and out allowing ECU to finish the game at the free throw line.

Freshman Adonys Henriquez led the Knights in scoring with 14 points, while Goodwin did a good job distributing the ball with eight assists and nine points of his own. Staphon Blair led everyone with eight rebounds and two blocks.

“It was a disappointing loss because I wanted it for the seniors as much as anything,” said Jones following the loss.

UCF’s final game of the regular season will be against USF in Tampa on Wednesday, March 4 at 7 p.m. After that the Knights will have a week to prepare for the American Athletic Conference tournament in Hartford, Connecticut.