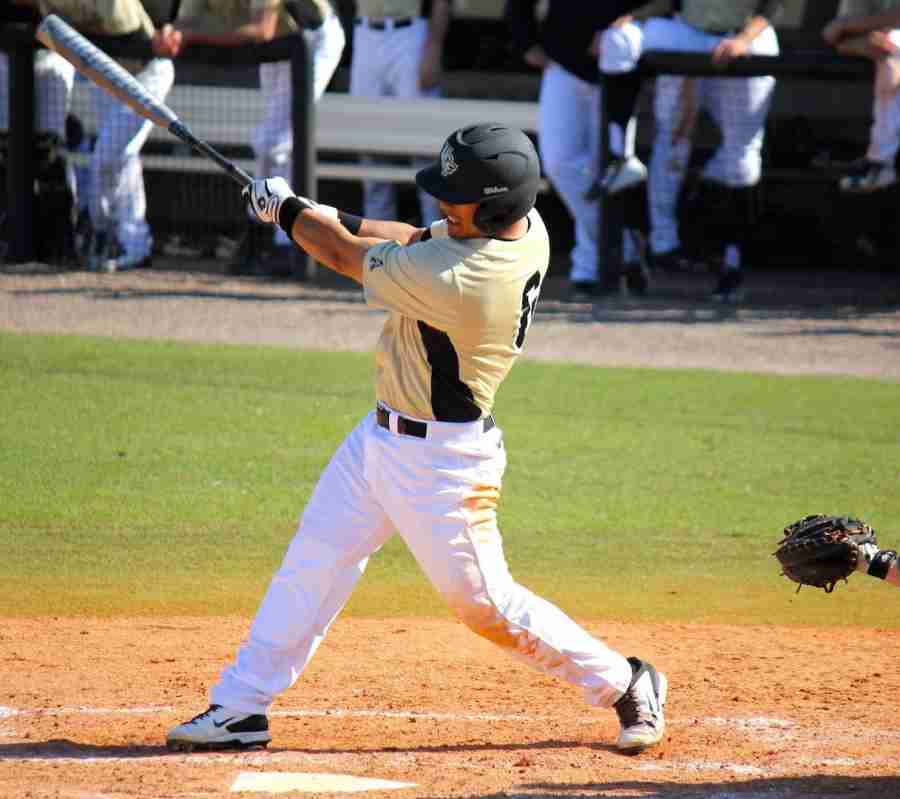 JoMarcos Woods finished Sunday's game with a walk and an RBI in the Knights' win.

Kyle Marsh and No. 15 UCF Baseball’s offense has been off to a hot start during the opening eight games of the season as the Knights sport a .351 team batting average and Marsh was just awarded the American Athletic Conference’s Player of the Week.

Marsh is batting .483 and has started all eight games for UCF so far this season. He leads the team with 24 total bases and 15 RBIs and is tied for the team lead with 2 home runs, 8 walks, 4 doubles and 9 runs scored.

UCF’s offense features seven players batting over .300, with four of those batting over .400. Designated hitter Matt Diorio is simply on fire to start the season hitting .517 (15-29).

The team’s .351 batting average ranks sixth nationally along with their .534 slugging percentage. Head coach Terry Rooney’s offense also ranks in the top 5 in the country in scoring at 9.9 runs per game and total runs with 61.

The Knights have opened up the season 8-0, tying the team’s best-ever start — UCF went 8-0 to start the 2008 season — and is their best start under coach Rooney. UCF has defeated ranked opponents in Maryland and Arkansas and swept a season-opening series against Siena during their undefeated start.

James Vasquez currently has the lowest batting average of any starter at .233 but his teammates are confident the senior will find his stroke, noting that baseball is a game of up’s and down’s.

“He knows and we know that he’s going to come around,” said senior Dylan Moore of Vasquez’s early season slump. “He’s a great hitter, he’s done great things in the past. Baseball is a very humbling game, a game of up and down’s and it’s how you handle failure. We’re behind him 100 percent.”

UCF will put their perfect record to the test on Friday when they face No. 18 Ole Miss in the first of a three-game series at Jay Bergman Field. If the Knights can win on Friday and improve to 9-0 that would mark the best start in UCF Baseball history.