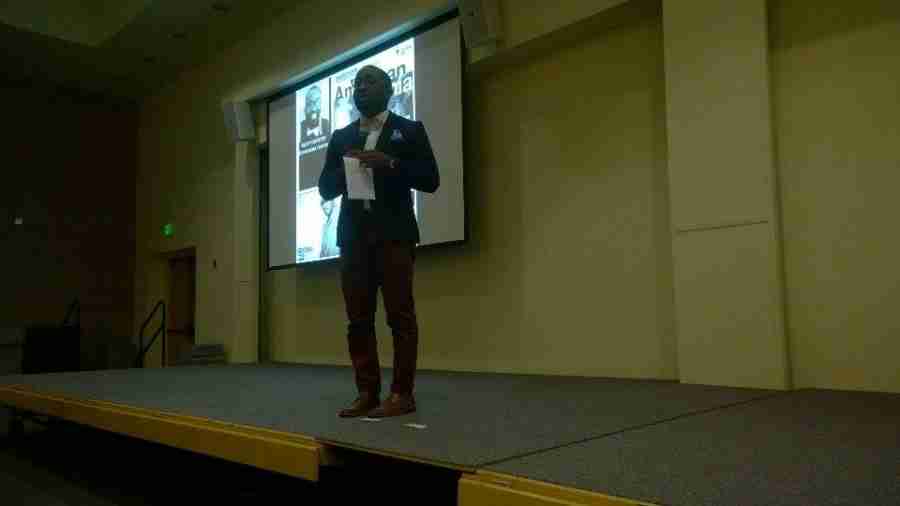 Rudy Darden is a professor of English at Valencia College, and serves a motivational speaker throughout the city of Orlando.

“American Denial” is a new documentary on the ongoing events that exist on this day in age on racism. PBS premiered the series Monday, and the Valencia community had the opportunity to watch the film before its release date.

After the one-hour film was presented to the crowd of over 100 students, Valencia College English professor Rudy Darden spoke to the crowd on his point of view and shared a few moments in his lifetime where he encountered racial bigotry. Mr. Darden explained how the unconscious brain automatically reveals some sort of racism even if you have no racial biased

The students in the event were put into groups of five where they each asked questions about their insights on racism and encounters. For example, one of the questions was “When was the first time you really saw that racism was a big topic?” One individual from a group would answer the question for sixty seconds and any remaining time left in those sixty seconds, the remainder of the group stood completely silent. Professor Darden called this method “respect the silence.”

The whole purpose of the activity was to conduct a sense of comfort and to be able as an individual to conduct one’s feelings in regards to the issue of racism in a short period of time. The entire group remained silent throughout the sixty seconds even if the person who was speaking was already done. The purpose of this was for the group to step in the individuals shoes and really understand why they felt some type of way about racism.

“The topic of race is one that is not spoken about and because of that, there are some consequences,” said Darden in reponse to the importance of the event. “The fact that we are in denial allows racism to still exist.”

Darden was not alone in the presentation, tagging along was former Valencia Voice adviser Ken Carpenter and local disc jockey, DJ D Strong. Carpenter is a professor of Journalism and is the former editor and publisher of The Golf Gazette. D Strong is more notorious from BET 106 & Park and is also the official DJ for the Orlando Magic. These two individuals enlightened the crowd with their interpretation on racism and how they felt about “American Denial.”

After the event came to a conclusion, a select amount of students who participated in the event were given a quick interview on their perceptions of the film and on racism itself.

”We (as a nation) are in the long process of becoming racist free,” said Valencia student Nima Nasser after the film. “And this begins with being knowledgeable on what is around us and what really happens in this world.”

The film ‘The American Denial’ itself is a very compelling documentary of well put information and data collected from years of research into a one-hour documentary film.