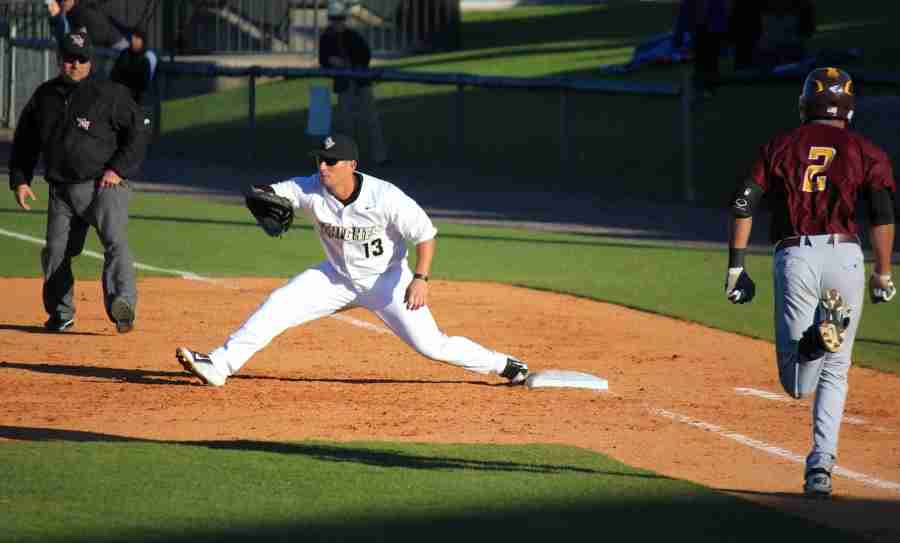 UCF scored 10 runs against Bethune-Cookman on Wednesday, making it the third straight game the Knights have scored in double figures.

ORLANDO — Kyle Marsh continued swinging a hot bat as he went 2-4 with 3 RBIs and 2 runs scored helping the No. 22 UCF Knights defeat the Bethune-Cookman Wildcats 10-2 on Wednesday at Jay Bergman Field.

Julian Santos gave the Wildcats their first run of the game with a solo home run in the top of the third inning, cutting the Knights lead to 4-1. Santos exited the game following the home run after he appeared to hurt his ankle rounding the bases.

Marsh got the run back in the bottom half of the inning when he hit his second home run of the season, extending UCF’s lead to 6-1 with the two-run shot. UCF added another run in the fourth and then two more in the fifth, taking a 9-2 lead into the sixth inning.

“It felt good, my swing on that was pretty good and I’m feeling really good with the bat,” said Marsh about his third inning home run. “I just got a good piece of it again and it went.”

Bethune-Cookman threatened in the top of the seventh when they got the bases loaded with two outs Trent Thompson got out of the jam without allowing a run.

UCF used seven different pitchers to get the win against the Wildcats including 3 innings from starter Ryan Meyer and one scoreless inning from Marsh after having gone 2-3 for the game.

“Especially with a Wednesday game going into a very big weekend for us I thought it was important to get a lot of our guys some work out there,” said UCF head coach Terry Rooney after the game. “And I thought overall they did a decent job.”

JoMarcus Woods made a diving play in the top of the seventh inning that garnered SportsCenter Top 10 Play acknowledgment and is expected to make the Top 10 Plays Wednesday night.

Matt Diorio drove in another run for the Knights in the eighth, extending UCF’s lead to 10-2 and giving them double digit runs scored for the third straight game.

The win improves UCF’s record to 4-0 for the season while extending the Knights advantage to 75-16 all-time in the series against the Wildcats.

UCF will now travel to Mobile, Alabama where they will participate in a four-team tournament against the likes of No. 16 Maryland, Arkansas and South Alabama. The Knights first game will be against Arkansas on Friday, February 20 at 3 p.m.

“Now we can turn the page, midnight rule, and get ready to go up there,” said Rooney about this weekend’s tournament. “So we are really excited to go up there, it’s an incredible tournament, just look at it we play Arkansas, play Maryland, play South Alabama.