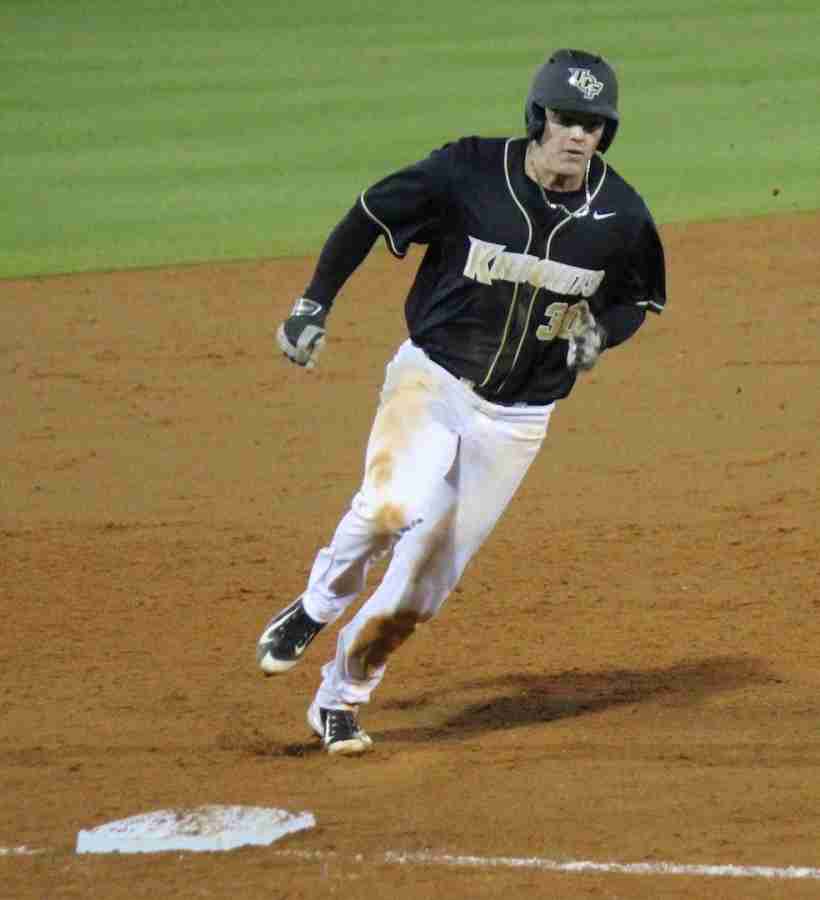 Matt Diorio scored two runs and drove in another in the Knights opening day victory over Siena.

ORLANDO — Matt Diorio scored two runs and drove in another as the UCF Knights baseball team defeated the Siena Saints 4-1 on opening night of the 2015 season at Jay Bergman Field.

Diorio scored his first run of the game when he crossed home plate after a wild pitch with two-outs in the second inning. He started off the inning by walking and then stealing second base, before moving over to third on a single.

“I do what I can and if I can score those runs I feel good,” said Diorio following the win. “I’m not that big of a base stealer but it was nice getting that first bag of the year.”

The Knights offense woke up in the third inning as they went for three runs on four hits to take a 4-1 lead. Dylan Moore drove in the first run of thin inning when his double scored Kam Gellinger from second and then Moore scored on a Diorio double down the left field line. UCF another when Kyle Marsh drove in Diorio with a double of his own making it a 4-0 Knights lead going into the fourth.

“The key to the game tonight was that third inning, with several two out RBIs” said UCF head coach Terry Rooney after the game. “We talk about it all the time two-out RBIs wins championships, three runs right there, two-out RBIs and Rodg (Rdogers) goes out and puts up a zero, that was the game right there.

“It’s all about momentum and that inning was fantastic.”

Diorio finished the game batting 1-3 with two runs scored, a run batted in and a stolen base.

Siena got their only run of the game in the fifth inning when Brian Fay had a two-out RBI single, cutting UCF’s lead to 4-1.

Rodgers got the win to open the season after getting his first career opening day start and went five innings giving up six hits and one run while striking out four.

“First outing felt good,” said Rodgers about his opening night start. “It was a total team effort tonight, hitting, defense, everything was great. It just made my job real easy going out there and getting the win tonight.”

Harrison Hukari came in to relive Rodgers to start the sixth inning and went 5 1/3 innings without allowing a run. Spencer Davis then came in to get the final two outs of the game, earning his first save since 2013.

Freshman Logan Heiser started at catcher for UCF on Friday, making his first colligate start, while also getting the first hit of his career.

“For a freshman to make your first start is pretty awesome in it self, but to be a starting catcher on Friday night under the lights is pretty awesome,” said Rooney of his freshman backstop. “I thought Heiser did a great job, he’s got a lot of energy back there, he’s got a great arm and he’s going to be great player for us.”

The Knights were without three seniors on Friday, Tommy Williams was out nursing an injury while Erik Barber and JoMarcos Woods missed the game

UCF now starts the 2015 season with a 1-0 record and improved to 7-0 on opening night under coach Rooney. The Knights return to Jay Bergman Field on Saturday for Game Two against Siena with first pitch scheduled for 4 p.m.

Robbie Howell will get the start for UCF on Saturday against Siena. The sophomore right-hander went 4-1 with a 5.79 ERA last season.