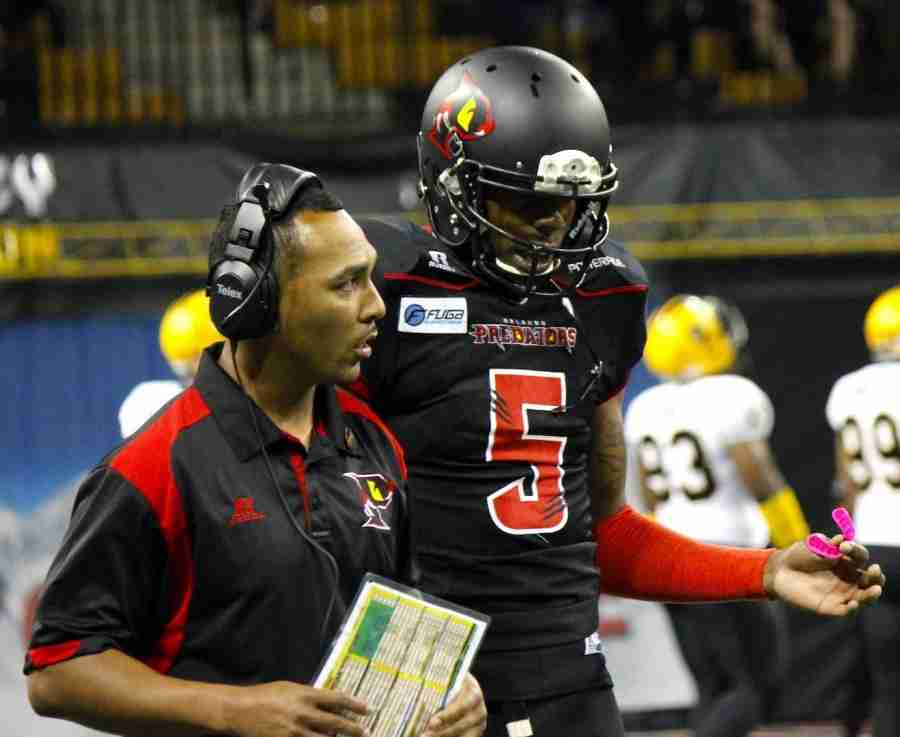 Siaha Burley (left) will be the Predators offensive coordinator for the second year in a row in 2015.

Former UCF wide receiver and current offensive coordinator for the Orlando Predators Arena Football team Siaha Burley will be returning for his second season with the Predators announced the organization on Monday morning.

Burley led the offensive effort to the number one spot in the AFL with 5,384 total offensive yards and to a league-best 13.1 yards per completion average. Burley also helped lead the team to a 11-7 record and to the 2014 American Conference Championship, a feat that seemed far off for the team that went 11-25 in the past two seasons.

“I know he’s excited, when you have another year to work together you understand how each other think, we’re only gonna be better together, we’re great off the field.” said head coach Rob Keefe about their relationship. “I think he learned a lot last year just being in the organization because we gave him a lot of responsibility and I think it made him a better coach.”

Under his play calling the team ranked third in touchdowns in the AFL, scoring 133 last season and ranked fourth in passing efficiency.

“I think he’s very excited for the talent we have on the roster, he’s so excited to get to work that it makes me feel good for him cause I know how much he wants to prove and to help us win a championship because he cares that much.” said Keefe on his offensive coordinator’s outlook toward the new roster. “I couldn’t be more excited for the coaching staff and all the people involved with this because we are just so anxious to get this started.”

Once a stand-out star receiver at UCF during the Daunte Culpepper era, Burley still holds the single-game record of 266 yards from their 1996 game against Louisiana-Lafayette and led the team in yards for his last two seasons there.

After joining the AFL in 2001, Burley made a name for himself earning a spot on the AFL All-Rookie team and earning the AFL Offensive Player of the Year twice. In nine years in the league he totaled 843 receptions for 10,810 yards and 247 touchdowns. He then became the Chicago Rush’s offensive coordinator in 2013 and led them to a division title.

The Orlando Predators will kick off their season against the Philadelphia Soul at the Amway Center in downtown Orlando on March 29 at 7 p.m.